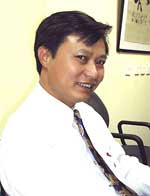 BANGKOK—A prominent Vietnamese journalist has called on the ruling Communist Party to do more to overhaul the country’s massive bureaucracy and “disoriented” economy and to clarify who runs Vietnam—party or state.

Phan The Hai, a Hanoi-based economics reporter for a semi-official online newspaper, said his petition was in response to the Communist Party's annual report ahead of the 10th Party Congress in April, which he read during the Tet lunar new year holiday.

"I spent my leisure time over Tet reading approximately 20,000 words of the report, and I wasn't satisfied," said Hai, who writes for VietnamNet (www.vietnamnet.vn), run by the Ministry of Post &Telecommunications; , and is also a former economics correspondent for the Vietnam Economics News magazine.

"To be frank, I had hoped very much to see changes. The title of the report used the phrase, 'totally boosting the innovation plan,' implying breadth and depth as well as both the ideological system and the approach to leadership," Hai said.

“But those terms are too big—they don’t correspond with what’s in the report. And some big issues are unclear.”

On Feb.3, the Party released its 30-page draft political report and invited public comment ahead of the 10th Communist Party of Vietnam (CPV) Congress later this year.

Hai said he had drafted his own five-point reply and sent it to the Central Executive Committee on Feb. 5. In it, he seeks to clarify whether the Party or the executive branch of government runs the country.

To be frank, I had hoped very much to see changes. The title of the report used a phrase such as ‘totally boosting the innovation plan,’ implying breadth and depth as well as both the ideological system and the approach to leadership. But those terms are too big—they don’t correspond with what’s in the report. And some big issues are unclear.

Separation of powers, with its potential to see more than one party emerging as a political force, is likely to be a thorny issue for the Communist Party.

Hai dismissed the official notion of a “socialist market economy.”

Aug. 23, 2005: Containers are unloaded from a ship at a container port in Northern Hai Phong habour in Vietnam. Photo: Hoang Dinh Nam

“There are now different groups of money-makers. Some people just seize every opportunity to make money, and they don’t need to exercise any deep thinking at all,” Hai said, adding that many people still fear that the state will appropriate their assets.

“Our principle is to implement a market economy, but it is still a deformed, disoriented monster—resources are still blocked and constrained,” he said.

Asked why he chose to speak out against party doctrine in a country widely known to suppress dissent, Hai replied: “I think that a patriotic person always thinks of doing something to serve his country. I felt I needed to voice my own opinions. And I consider this to be my responsibility toward my country.”

“People have often been dissatisfied by the cumbersome and ineffective system of Vietnam,” he said, citing “a management system in which 64 cities have 64 executive chairmen, 64 city-level Party-assigned secretaries, 64 executive committee offices, and 64 city-level party office systems and the same network is implemented at the district level.”

Hai also proposes dropping Marxism-Leninism as a subject for quasi-religious study and “setting a direction for socialism.”

“The national economy has come to a deadlock and a lack of motivation. Right now the introduction of a market economy is still halfway. Many people who are motivated to make money and become rich will constantly be worried about a future of the direction of socialism that will eat them once they have become fat enough. Or is their property going to be confiscated and become state-owned? Are they going to be prosecuted in people’s public courts? Things like these have occurred in history.”

Many of Hanoi’s goals were derived from Confucian tradition and from the French Revolution, he said.

“It isn’t right for us to claim these borrowed ideas to be socialist. It is clear that we should be straightforward enough to state that we are directing our country toward those borrowed guiding ideas, but not toward socialism.”