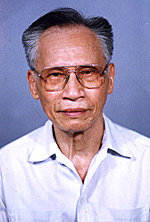 WASHINGTON—Dozens of people armed with wooden sticks and rotten food attacked a prominent 84-year-old Vietnamese dissident, while police allegedly looked on and later refused to take a report.

“About 50 people, maybe more, maybe less, gathered in front of our house,” former Communist Party intellectual Hoang Minh Chinh said. “They encircled me and harassed me. They shouted, ‘You bastard, what did you do? You went abroad and said bad things about the government.’”

The Dec. 1 attack is the latest in a series against Chinh, who is currently staying with his adult daughter in Hanoi following a U.S. trip in August. While in Washington, Chinh testified to a U.S. congressional committee on human rights violations in his homeland.

They encircled me and harassed me. They shouted, ‘You bastard, what did you do? You went abroad and said bad things about the government.

“They then encircled me. Some guys hit my head with their bottles of spring water. They beat me three times altogether,” he said.

“Three guys jumped forward, and beat one of them. One member of the mob, aged about 50, came forward to our eldest daughter, grabbed her hair, pinned her down, and hit her hard.”

Born on Nov. 16, 1922 in the northern province of Nam Dinh, Chinh is a former Secretary General of the Vietnam Democratic Party and also a former director of the Vietnam Institute of Philosophy.

In Sept. 29 testimony to the Committee on International Relations of the U.S. House of Representatives, Chinh recounted a litany of rights abuses against religious groups, pro-democracy politicians, and prisoners of conscience.

The Dec. 1 attack lasted around three hours, during which the house was pelted with rotten eggs and tomatoes, and further threats were hurled, while four uniformed security agents looked on, Chinh said.

Usually a crowd of 30 people or so must be dissolved immediately. Also, special permission had not been requested in this case. What was very strange was that the mob intentionally attacked, insulted, and threw dirty stuff at the old couple and their children.

“[They] just stood there and watched the mob, and disregarded the attackers,” he said. The guards only intervened when the mob moved to break down the front door of the family home.

Last month, Chinh issued an appeal to the United Nations and the international community to intervene to prevent repeated attacks on his daughter’s house, which included a neighbor brandishing a butcher knife and someone throwing acid into his house.

In previous interviews with RFA’s Vietnamese service, Chinh said he was fairly sure where responsibility for the attacks lay. “The circumstances indicate to me that this is not a spontaneous reaction on the part of the local authorities but it is instigated by higher authorities,” he told RFA reporter Viet Hung.

“The circumstances mean that the centrally-controlled Party media have already made false allegations against me. Thus they have stirred anger in the people in readiness for violations against my safety and the safety of my whole family,” he said.

Writer Hoang Tien witnessed the incident, he said. The couple called officials and security officers who promised help, but officials arrived only after most of the damage was done and then refused to take a crime report, Tien said.

“Only after they attacked, intimidating from outside the house, breaking the glass door, insulting [the Chinhs], and throwing such smelly things as shrimp sauce did the green-uniformed security agents appear, and by that time the dirty attack had already finished,” he said.

“The victims asked to file a report, [but] their request was refused. So our conclusion was that the government had certainly given a green light for the attack.”

“Usually a crowd of 30 people or so must be dissolved immediately. Also, special permission had not been requested in this case,” Tien said. “What was very strange was that the mob intentionally attacked, insulted, and threw dirty stuff at the old couple and their children.”

Residents of the Viet Kiet Compound later reported seeing some plainclothes security agents in the crowd, using their mobile phones, he said.

Security officials at the Hang Bai precinct in Hoan Kiem District, asked how they had handled the Chinhs’ calls for help, declined to comment.

An official with Security Task Force Team 113 of Hoan Kiem District acknowledged logging a request for help and dispatching officers who found nothing amiss.

“According to our…daily incidents log, someone called our office to report that a crowd of rowdy people came to cause disorder that affected the safety of local residents. After the report, members of Security Task Force Team 113 arrived at the spot,” the official said.

“After evaluating the information sources, they noticed that there was nothing but a relationship between a number of people and a certain person that came back home from a medical treatment trip overseas, and that they wanted to question him about his feedback about information sources abroad,” he said.

“These people reported that they just wanted to get more understanding about such a thing and just questioned him about it. And indeed they did not intend to take any action of violence…If you have any concern or feel that such an incident may have its negative impact, go ahead and file a complaint or directly contact some other responsible authority.”