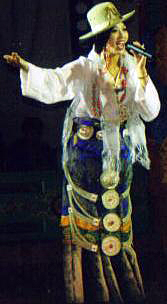 Folk singer and restaurateur Kyid Jam was born to a nomadic family on the grasslands of Serta county, in the Karze Tibetan area of Sichuan province, southwest China. At the age of 15, she was selected to join a performing arts group. Thus began a singing career that was to take her to the region’s chief city, Chengdu, where she now runs a Tibetan restaurant and performs her songs. She spoke to RFA Tibetan service presenter Chakmo Tsho:

“I’m from a nomadic area and therefore had no chance to learn to read and write. So, living a nomadic life, I picked up traditional songs early, and later on, I competed in a singing contest in the district and won first prize. After that, I entered a singing contest among top singers from the various districts at the prefectural level. There, too, I won first prize. That is how I was discovered. I remained a member of the Performing Arts Troupe of Ganze Tibetan Autonomous Prefecture for over 10 years. My main role was to sing nomadic songs.”

“I’m not really literate in either the Tibetan or the Chinese languages. Between the two, I’d say I’m more proficient in Chinese as I’m not that literate in Tibetan. That is how it is. In the past, when I was growing up, there was no opportunity to learn Tibetan. It was Chinese that we had to learn. Only after becoming a member of the troupe did I began to try to self-study Tibetan as best as I could. That is how I have acquired a basic ability in the Tibetan language to sing songs. Otherwise I’m not really that literate. I didn’t get many songs recorded. The earliest was back in 1993 when an audio recording of a large number of Tibetan folk singers was being made.” 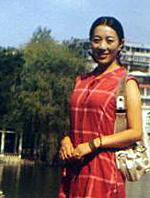 “Then in 1999, I moved to Ziltsa Degu [in Chinese, Juizegu] where there is a Performing Arts Center. There I stayed and worked for seven or eight years. After that I came to Chengdu and settled down here after opening my restaurant. The reason for coming here is my daughter. It was not convenient to arrange a proper education for her over there. I came down for the sake of her educational opportunities. That is how I started the restaurant here.”

“Now it has been over three years since we opened this restaurant. It’s called Gesar Tibetan Kitchen. The fare we serve is distinctly traditional Tibetan food. We don’t serve any kind of Chinese food. Yet our customers include Tibetans, as well as Chinese and foreigners. We have all kinds of people coming in.”

“It’s one of the larger restaurants among the Tibetan restaurants in Chengdu. We don’t have any major difficulty in running the restaurant now. The business is getting better every year. The first year we started the restaurant, people were not that impressed with our cooking, and we really didn’t know how to cook well. Customers were few and far between. But between last year and this, people are full of praise for our cooking and culinary skills, and the number of customers keeps increasing now.”

“Initially, people came because I was a folk singer. People had heard of this so-and-so folk singer who has opened a restaurant called the Gesar Tibetan Kitchen in Chengdu and said to each other, ‘Let’s go and check out how good the food is in her restaurant.’ Many people initially patronized the restaurant out of curiosity.”

“There are people from Karze, from Aba, from Lhasa. From everywhere, really. But the large majority is indeed from the Karze and Aba areas. There are many lamas and tulkus, too. We have lots of Chinese customers. Some Chinese come saying, ‘We enjoy Tibetan food.’ Others come out of curiosity and say things like, ‘We’ve heard of you. We’ve never eaten any Tibetan food. Could you recommend the most delicious Tibetan food to us?’ and so on. Still others come, saying, ‘We love Tibetan food. We have come especially to enjoy Tibetan dishes.’”

“So far, I have recorded songs only on audio tapes, you know, way back in 1993. Apart from that format, I have not recorded any video album. However, since last year, or this year rather, I have started thinking of recording a video album of my songs.”

Original reporting in Tibetan by Chakmo Tsho. RFA Tibetan service director: Jigme Ngapo. Translated by T.D. Gonkatsang. Produced for the Web in English by Luisetta Mudie. Edited by Sarah Jackson-Han. Please continue to send contributions to RFA’s Women in Their Own Words project to women@rfa.org.

Women in Their Own Words