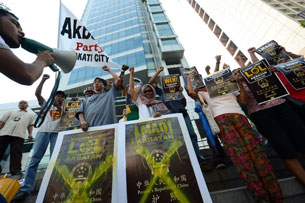 The year 2012 was a watershed year for China’s foreign policy, at least in Asia. The caution and gradualism that have marked its domestic and economic policies and its dealings with the United States were all forgotten as it gratuitously offended its Asian neighbors with its aggressive behavior over the East and South China Sea disputes.

China may believe that its long-term rise and the long-term gradual decline of U.S. and Japanese power assure that  its regional territorial and influence ambitions, declared and undeclared, will eventually be realized. But the unveiling of these ambitions is setting up what could prove to be an equal and opposite reaction.

By the end of the year, the reverberations from China’s confrontations with Japan, Vietnam, and the Philippines had reached Delhi, where an India-ASEAN Summit was held Dec. 20-21. This was a symbolic commemoration of 20 years of links between the two and seemed likely to be confined to messages of goodwill.

But it actually produced a statement looking to the creation of a “strategic partnership” encompassing security as well as economic and political cooperation. There was no mention of China, but Beijing could have been in no doubt that they had it in mind.

Elaborating on the statement, host Prime Minister Manmohan Singh said: “India and ASEAN should intensify their engagements for maritime security and safety, for freedom of navigation, and for [the] peaceful settlement of maritime disputes in accordance with international law.”

These words especially were significant, following so soon after India’s naval chief Admiral D.K. Joshi said that India was prepared to send ships to protect drilling by the state-owned Oil and Natural Gas Corporation in Vietnam’s Exclusive Economic Zone—waters subject to Chinese claims.

China in turn responded with a statement in Sri Lanka by Admiral Su Zhiquan that China would “actively maintain the peace and stability of the Indian Ocean,” where for some time it has been helping suppress Somali pirates.

India and ASEAN are saying they have as much interest in the South China Sea being an open, international waterway, and not a Chinese lake, as China has in maintaining open sea lanes through the Indian Ocean to its sources of raw materials and investments in Africa and the Gulf region.

Both are annoyed by the map shown in new Chinese passports that claim parts of Indian territory, as well as all of the South China Sea islands, as Chinese. Most of Asia prefers the status quo as established either in 1945 or by de-colonization processes. And most, including South Korea, are concerned about freedom of the seas for trade.

For the foreseeable future, India’s power projection ability will remain modest. It is in no real position to intervene militarily in the South China Sea. But equally, the price that China will now have to pay if its uses might to get its way is rising. The small and middle powers of the region, including Indonesia and Australia, are engaging in opportunistic alliances with India, Japan, South Korea, and perhaps Russia, and support a continued U.S. presence.

The Philippines, which over the past year has responded with diplomatic and rhetorical vigor to China’s brazen attempts to establish a permanent presence on the Scarborough Shoal, which is well within the Philippines’ Exclusive Economic Zone, is now talking to Japan about being provided with coastguard craft to supplement Manila’s puny maritime strength.

India also has a very long way to go before its economic influence in ASEAN comes close to that of China. However, awareness is growing as western markets stagnate and as ASEAN countries become concerned about over-dependence on China.

There is even the beginning of a reawakening of the legacy of Indian culture. China’s sea claims are themselves a reminder that long before China exacted tribute from neighbors trading with the 'Middle Kingdom,' Indian cultural and religious influence had spread peacefully throughout the region.

All of ASEAN apart from northern Vietnam first learned writing from India, whose cultural influence overlaid Austronesian languages. It was Indian and Malay traders who linked the spice islands to markets in the West.

These ancient influences were much weakened by imported Muslim and Christian doctrines, by Western imperialism and Chinese migration, and most recently by the rapid economic rise of East Asia compared with India. But the more they feel pressured by China, the more ASEAN and India will think of the non-Sinic things they share. Demographics will also likely mean their economies will grow faster than that of an aging China.

With the Congress of the ruling Chinese Communist Party and leadership issues now settled, it is possible that China’s nationalist posturing will no longer be needed for domestic purposes. However, even assuming that Xi Jinping adopts a more conciliatory tone, and that the various ministries and military men who want to meddle in these internationally sensitive sea and island issues are brought under control, the legacy of 2012 is likely to shape the multipolar Asian world for a long time to come.

A potentially paranoid China may see in all this a U.S.-inspired attempt to surround and contain it. But the more China talks of historical claims based on, or beyond the maximum extent of, its past borders, or appears to looks to a revival of the old tributary system of loose hegemony, the more those nations will seek safety in numbers.

The era of a “peaceful rise” is over. China is a global power, and with that comes the need for sensitivity in how its power is used. China’s positive global role depends on being seen as a positive force in its own region.

The lesson of 2012 is that China has unnecessarily inspired suspicions of its goals, causing shifts in long-term strategic thinking and altering the perceptions of some of those, including India, who had welcomed its emergence as a major global player and counterweight to the U.S.

Philip Bowring, former editor of the Far Eastern Economic Review, is a freelance columnist based in Hong Kong. He is a regular contributor to the International Herald Tribune.