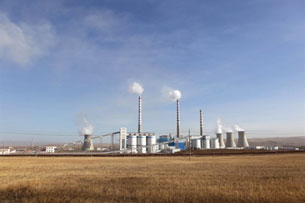 China is facing a wave of power shortages because of low coal supplies and rigid economic rules.

Central and northern provinces have been struggling with cold-weather power cuts and dwindling coal stocks at generating plants, the Associated Press reported on Dec. 20.

The troubles are likely to continue throughout the winter, the official English-language China Daily said.

What began as an isolated problem in central Henan province has spread quickly in an arc from Shaanxi in the west to Zhejiang province in the east, according to China's State Grid.

The winter disruptions have become common in recent years because of higher heating demand and the challenge of transporting China's annual output of over 3 billion tons of coal.

But a combination of factors including price constraints and the government's energy efficiency campaign have added to this winter's difficulties, leaving officials in a bind.

Robert Ebel, senior adviser to the energy and national security program at the Center for Strategic and International Studies in Washington, said the collision of factors was entirely predictable.

"Many people said this is what's going to happen," Ebel said. "I'm sure the government knew it was likely."

The government has faced an energy squeeze because it is trying to control prices and keep inflation in check.

On Dec. 1, the National Development and Reform Commission (NDRC) barred increases in coal contract prices for the next year after generating companies complained of "serious losses" under their fixed rates for power.

With inflation running well above the government's three percent target for the year to 5.1 percent in November, the government has resisted calls to lift price curbs, despite the chilling effect on supplies.

Some power companies have been cutting production to stem losses, according to China Daily, while coal mines have little incentive to produce more unless the government lets prices rise.

"If you raise prices, that impacts on inflation rates and they're not ready yet to do that," said Ebel.

But trouble was brewing even before inflation became the government's biggest headache.

Local officials have been sporadically shutting off power supplies for months as a way to meet the government's five-year target of cutting 20 percent of energy use per unit of GDP by the end of 2010.

The efficiency campaign has added to the disruptions of supply and demand for power companies and coal producers.

Yet another problem has been the government's push to merge smaller mines into larger coal companies in an effort to improve safety.

In November, the NDRC ordered local governments to lift limits on coal sales outside their provincial borders after some officials used transport restrictions as a way to force more mergers of small mines.

Officials seem to have followed the transport directive, but the results may have backfired.

Now, some coal-producing provinces are said to be in short supply. Power stations in Shaanxi, for example, are reported to have only 4.4 days' supply of coal on hand.

The complications of the government's central planning policies have come together at the end of the year to create a snarl in power supplies.

But so far, there seems to be no overriding response to straighten it out.

'A degree of rigidity'

"There's a certain degree of rigidity," said Ebel. "They think about it, they look at it, but then they go about doing what they had planned to do."

While the winter shortages may be temporary, there are also signs of power problems for the longer term.

On Dec. 21, the China Electricity Council predicted that the country's electricity use would nearly double to 8.2 trillion kilowatt-hours by 2020. But it estimated that rates would rise by only one-third, the official Xinhua news agency reported.

Speaking at a session of the Standing Committee of the National People's Congress (NPC), Vice-Chairman Hua Jianmin called for energy pricing reforms.

"The current mechanisms used to price coal, electricity, and natural gas do not reflect their scarcity as resources or the market relation between supply and demand, which makes it difficult to encourage energy conservation," Hua said, according to China Daily.

The NPC reportedly recommended "long-term mechanisms" for energy pricing rather than forced measures like power cuts, but it was unclear whether officials would consider ending price controls.

Under NDRC rules, retail prices can be adjusted if international crude costs change by more than four percent over a 22-day period. But the government apparently moved only after delaying and moderating the price hike.

Liu Zhenqiu, vice director of the NDRC pricing department, said the government had postponed the increase, which "did not exactly follow the international price trend."