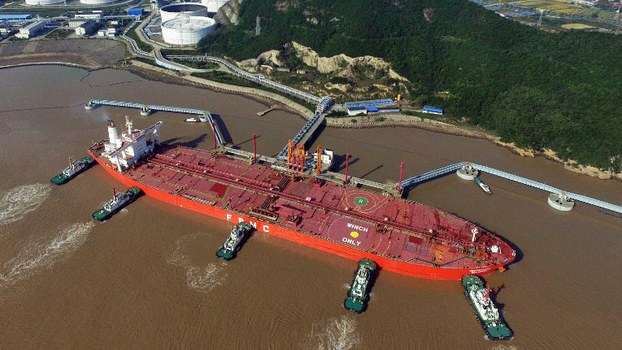 Tugboats dock an oil tanker on a crude oil quay at a port in Zhoushan, eastern China's Zhejiang province, Nov. 11, 2016.

As concern rises in China over reliance on imported oil and gas, U.S. sanctions on the transport sector have heightened the country's energy security risks.

While the sanctions are specific and targeted, they threaten to complicate operations for the state-owned China Ocean Shipping (Group) Co., known as COSCO, one of the largest carriers in the world.

In a press statement, U.S. Secretary of State Michael Pompeo cited the subsidiaries for "knowingly engaging in a significant transaction for the transport of oil from Iran," in spite of the U.S. curbs.

"This is one of the largest sanctions actions the United States has taken against entities and individuals identified as transporting Iranian oil since our sanctions were re-imposed in November 2018," Pompeo said.

The sanctions issued under an executive order from President Donald Trump have the effect of freezing the assets of the Chinese shipping companies and their executive officers within the reach of the United States and banning U.S. transactions with them.

Despite the stiff penalties, reports on the sanctions were buried in the avalanche of news following the attacks on Saudi Arabian oil facilities, protests in Hong Kong, trade war tensions with the United States, and China's National Day celebrations.

In the energy sector, the Sept. 14 bombing of Saudi oil assets, which Washington blamed on Iran, underscored China's vulnerability by raising risks for two of its most important oil suppliers at once.

The crisis highlighted the energy security risks for China, which relied on imports for some 70 percent of its oil and 44.5 percent of its natural gas consumption last year.

Yet, a recent research commentary published by the Oxford Institute for Energy Studies (OIES) concludes that "the U.S. is emerging as (China's) biggest source of energy insecurity" in the wake of the sanctions, surpassing the impact of the attack on the Saudi oil industry itself.

Although the curbs on shipping appeared to be carefully targeted, they have become "a bigger headache for Chinese traders and oil more broadly," said Michal Meidan, director of the China Energy Program at OIES.

"The preliminary conclusion for China from these tumultuous few weeks in the oil market is that its biggest energy security problem is not the Middle East, it's the U.S.," Meidan wrote.

In her commentary, Meidan argues that the initial effects on oil supplies and prices from the Saudi attack have been relatively short-lived, while Chinese energy officials have given assurances that the country is adequately prepared with stocks on hand and alternate sources of crude.

But Meidan wrote that market reactions have already been widespread. The COSCO Shipping Energy subsidiary temporarily halted trading in Hong Kong, although it was not targeted for sanctions. Oil buyers also reportedly held off or cancelled bookings on some COSCO ships, the commentary said.

China is heavily invested in the Yamal LNG project and Russia's planned Arctic LNG 2 venture, which would ship super-cooled gas to Chinese port terminals by tanker. Thirteen of the tankers have already been built for the projects with two more expected to be completed by the end of the year, Interfax said.

China was seen as likely to shift its dealings with Iran to avenues beyond the reach of U.S. sanctions, the OIES analysis suggested. Moves could include a transfer of marine insurance to Chinese companies, it said.

So far, there have been few signs that China intends to comply with U.S. sanctions on Iran, although the threat may be related to recent reports that CNPC has backed out of a deal to help develop a phase of Iran's giant South Pars gas field.

On Sept. 25, the day of the OFAC announcement, the head of the Iran-China Chamber of Commerce and Industry (ICCCI), Majid Reza Hariri, told the English-language Iran Daily that China has assumed a "key position" in resisting U.S. sanctions for the past 40 years.

Mikkal Herberg, energy security research director for the Seattle-based National Bureau of Asian Research, said the OIES analysis reflects the turmoil that even limited U.S. sanctions have stirred up among China's traders and state oil companies.

"And I think the fact that the Saudis were apparently able to patch up their equipment so quickly made the attack seem less important than it could have been," Herberg said.

But whether the United States will represent a greater risk for Chinese energy security than an unstable Middle East will depend on the future course of events, he argued.

"To me, the risk of larger or more effective attacks on infrastructure, tanker traffic, ports or refineries grows as Iranian oil exports dwindle," said Herberg.

"My sense is that we are headed for much more violent developments impacting supply unless there is some kind of rapprochement with Iran," he said.

The shipping sanctions raise the question of U.S. motivations in the broader context of relations with China in the midst of tariff negotiations and a long series of separate penalties, including the addition of 28 Chinese governmental and commercial organizations to the U.S. Commerce Department's "entity list."

The wide range of issues in U.S.-China relations that have become subject to sanctions suggests that each stands on its own merits rather than representing chips to be traded away in one grand bargain deal.

Even so, the energy-related and transport sanctions may hit China in an especially vulnerable spot, considering the rapid growth of its reliance on imported oil and gas.

In an email message, Meidan said the goal of the transport sanctions "is clearly to disincentivize China from trading with Iran." But she added that the tactic is unlikely to work, citing an earlier OIES analysis concluding that China will keep importing oil from Iran, although probably at lower volumes.

"I doubt the goal would be to add more pressure to the Chinese economy or limit China's supply options," Meidan said.

"Any sharper economic slowdown in China would of course negatively impact global economic growth, while limiting Chinese supplies would have knockon effects on global oil prices," she said.

"There may be some misguided notions in the administration that additional pressure will bring China back to the negotiating table with additional concessions, but the history of the trade war has demonstrated that China is unlikely to respond to this pressure by conceding," Meidan said.