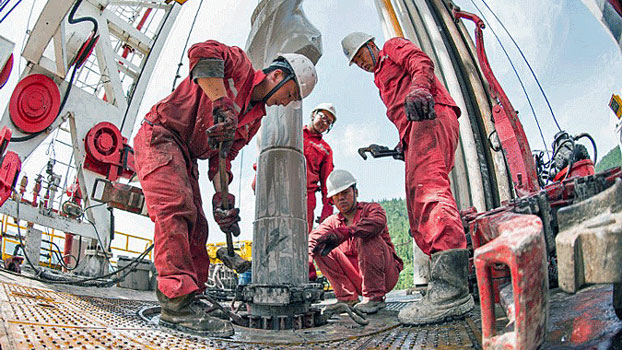 Employees of China's Sinopec work on a platform at the oil giant's Fuling shale gas project in southwestern China's Chongqing municipality, May 24, 2016.
Xinhua

CNPC produced 4.27 billion cubic meters (bcm) at its fields in neighboring Sichuan province, raising output from a year earlier by 40 percent, it said.

Both companies had made significant progress in cutting development costs and improving efficiency of shale fracturing, or "fracking," technology, said industry analysts in official media reports.

For the past seven years, the government has looked to shale gas development as an offset to China's rising reliance on imports and lagging domestic production.

But independent reports focused on forecasts that China will fail to meet the government's revised production targets for shale gas in 2020. The outlook also appears clouded following the withdrawal of international oil companies (IOCs) from shale projects in the country due to disappointing results.

"China Set To Miss Shale Gas Production Target by a Mile," said a headline on the industry website Oilprice.com on April 30.

The government has been pushing the NOCs into ever-greater investments since 2011, when the U.S. Department of Energy estimated China's "technically recoverable" shale gas resources at 1,275 trillion cubic feet (36 trillion cubic meters), nearly 48 percent more than those in the United States.

The estimate raised expectations that China could duplicate the U.S. success in shale gas development, but those hopes have proved unrealistic.

In 2012, China's Ministry of Land and Resources (MLR) set a more conservative resource estimate of 25 trillion cubic meters (tcm). But the National Energy Administration (NEA) spurred expectations by issuing an annual production target of 60 bcm to 100 bcm for 2020.

The forecast met with skepticism from industry analysts, citing China's difficult geology and technical challenges, which have limited its production of conventional gas for years.

In 2014, the NEA downgraded the 2020 target, cutting it back to just 30 bcm. But even that seems unlikely to be achieved.

On April 12, Wood Mackenzie analyst Xianhui Zhang said the company was forecasting production of 15 bcm for 2020, only half of the government's target level. The group's estimate was reportedly set at 17 bcm last year.

"China's shale gas formations tend to be deeper, more fragmented and less pressurized compared to the U.S.," Zhang said in a statement on Wood Mackenzie's website.

The forecast followed reports by independent media outlet Caixin and Reuters that oil major BP had decided to withdraw from two shale production contracts with CNPC in Sichuan due to poor results. BP has not commented.

"We understand that both poor well performance and challenging above ground conditions contributed to BP's decision," said Zhang, adding that BP was "chasing deeper targets than those being drilled at Sinopec's Fuling development and (CNPC) PetroChina's three current shale projects."

BP is said to be only the most recent international major to bow out of China's shale gas efforts.

"But China's state-run oil majors will continue to invest large sums in the shale gas sector, no matter how costly this is, driven by Chinese President Xi Jinping's demands to increase domestic oil and gas production, and rely less on oil and gas imports for national energy security," said the industry publication, citing "Chinese sources."

Philip Andrews-Speed, a China energy expert and geologist at the National University of Singapore, agreed with the assessment, although domestic shale gas is not making much of a dent in imported gas growth.

"Yes, the Chinese NOCs are persisting, most probably after orders from above, as the maximization of self-sufficiency in energy supply becomes a higher priority after several years of slipping down the order of importance," Andrews-Speed said. 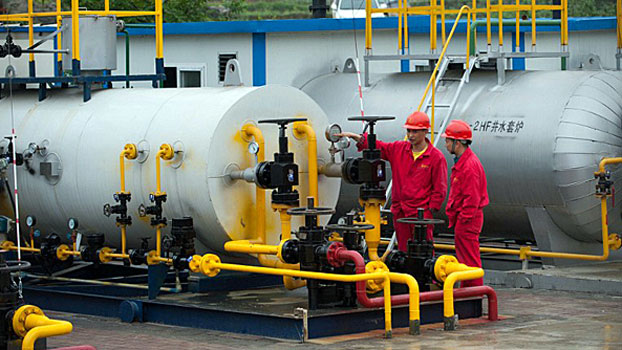 Production growth at China’s Fuling shale gas field in Chongqing is also apparently not as strong as state media reports have implied.

A review of China Daily coverage in March 2018 found that the paper used nearly identical words for Fuling gas output in 2017, describing it as "over 6 billion cubic meters," indicating that there was little or no growth in production last year.

While the growth rate looks impressive, the volume remains small, and the total suggests that the growth came almost entirely from CNPC's Sichuan operations.

China Daily acknowledged that reaching the government's 2020 target "will not be easy, as most of the country's shale gas reserves are located in remote, mountainous regions that lack a network of pipelines and other infrastructure."

"This leads to relatively high exploration costs due to the challenging geographical characteristics as compared to the U.S.," the paper said.

The outbreak sparked memories of the catastrophic Wenchuan quake in unstable Sichuan, which claimed nearly 90,000 lives in 2008. Fracking has been blamed for increased frequency of tremors and smaller quakes in the United States.

But on March 7, the official Xinhua news agency reported that a CNPC affiliate had stepped up testing in Sichuan's Luzhou city after a shale gas well there produced a flow rate of 1.32 million cubic meters per day.

The well located in Leida village is the first in China to exceed the 1-million-cubic-meter mark, the company said in an apparent rejection of the protestors' demands.

Andrews-Speed said the response to the earthquake risks may be a test of the government's support for shale gas development.

"Of critical importance will be the government's reaction to the earthquakes this year in Sichuan that led to significant injury and property damage," said Andrews-Speed.

"Local governments responded by suspending drilling. But what happens now? What conditions are set for future drilling? How does the local population react?" he asked.