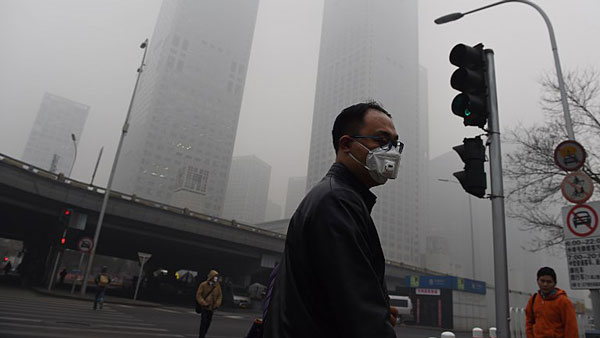 Citizens in many parts of China are paying a high price in terms of air pollution for reported improvements in Beijing, a recent environmental study suggests.

In a study released this month, the environmental group Greenpeace East Asia said that significant gains in reducing smog in the capital and the surrounding region were unmatched elsewhere in China last year.

While Beijing recorded a 53.8-percent drop in smog-forming particles known as PM2.5 in the fourth quarter from a year earlier, concentrations actually rose in some provinces of the northeast and southern regions in 2017, Greenpeace said.

Among the provinces reporting results across the country, average PM2.5 concentrations fell 4.5 percent, the lowest rate since China declared its "war on pollution" in 2013, said Greenpeace climate and energy campaigner Huang Wei.

The particulate readings rose last year in provinces including Heilongjiang, Anhui, Jiangxi, and Guangdong by rates ranging from 4 percent to 10.4 percent, the group said.

The analysis of provincial emissions paints a different picture from reports by the Ministry of Environmental Protection (MEP) on PM2.5 levels in 338 monitored cities across China.

On Jan. 18, the MEP said that average PM2.5 density in the cities fell 6.5 percent last year to 43 micrograms per cubic meter.

The Greenpeace study blamed the higher provincial figures on increased coal burning from 2016 to late 2017 as a result of economic stimulus policies and excessive real estate investment that spurred polluting industries, such as steel and cement.

The findings support the conclusions of China analysts who argued that the government encouraged credit-fueled economic growth in the months before last October's critical 19th National Congress of the Communist Party of China (CPC), which consolidated President Xi Jinping's political control.

After giving free rein to gross domestic product growth, the government acted belatedly to meet the targets of its five-year air pollution action plan issued in 2013 in hopes of avoiding another smog crisis like the one that choked Beijing in the winter of 2016-2017.

The late shift in priorities became apparent in August when the MEP set rules to ban coal-fired heating in 28 northern cities for the approaching winter season starting Nov. 15.

The push to convert nearly 4 million homes to natural gas or electricity left thousands without heat due to unfinished projects. On Dec. 4, the MEP relented and allowed coal use to resume in the affected areas surrounding Beijing.

The emissions data compiled by Greenpeace appears to reflect the changes in the government's agenda before and after the party congress.

Then in the fourth quarter, PM2.5 levels dropped by nearly one-third as regulators stepped up the fuel-switching campaign. Favorable weather conditions also contributed to the improvement, Greenpeace said.

The study found signs of an "emission spillover" effect from winter shutdowns of factories and steel mills in the Beijing-Tianjin-Hebei region, aimed at averting another cold-weather smog crisis. Plants in Hebei province compensated for the seasonal cuts with higher production over the summer, contributing to record ozone levels, it said.

The scheduling shift and the impact on emissions were predicted last April shortly after the government's plan to reduce wintertime operations was announced.

The emissions data also provides evidence that provinces outside the restricted zone affecting Beijing made up for the regional shortfall in output with big increases in steel, coal-fired power and metals production.

The findings raise questions about whether the government's environmental policies are being applied evenly across China, and whether they are effective in controlling pollution if they are not.

Tougher environmental controls in the capital region may do little to limit China's emissions of particulates or greenhouse gases if coal-fired industries simply move to other parts of the country.

A further question is whether the controls on Beijing and nearby cities are a response to political pressure and attempts to turn the capital into a showcase. Or are they part of a typical pilot program leading toward country-wide reforms?

The answers may depend on the government's priorities for economic growth and environmental improvement, which have shifted back and forth over the course of the past year.

Philip Andrews-Speed, a China energy expert at National University of Singapore, said the data demonstrates the priority to clean up the capital in response to the government's agenda and complaints from residents.

"The Beijing-Tianjin region was always one of the focal areas for the 2013 clean air targets, and I am sure that this was for political as well as other technical reasons," he said.

But the higher priority may be to deliver the economic growth rates that the CPC has promised, creating pressure to boost production elsewhere in China.

"All these trends are closely tied to economic growth, economic structure and industrial output, factors that seem just as important as or more important than 'clean production,'" Andrews-Speed said. 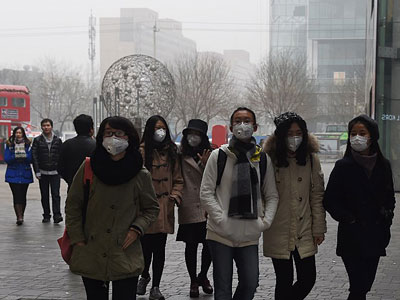 The push for smog reduction in Beijing is also part of the government's larger plan to transform the capital's environment with heavy-handed measures.

In 2015, Beijing announced plans to build a "subsidiary administrative center" in the southeast district of Tongzhou to ease "urban diseases" in the central city area. Since then, the authorities have closed down wholesale markets and other public facilities to drive activity out.

Last week, municipal authorities signaled a series of new steps, including plans that will cost many migrant workers their homes.

The city will "ensure zero increase of such structures," Chen said.

The estimate of a two-percent jump in the world's carbon dioxide (CO2) emissions highlighted the consequences of China's policy changes.

Coal production and import figures for 2017 support the consumption estimates.

In sync with lending practices

The environmental trends tracked by Greenpeace roughly correspond to the lending practices of China's state-controlled banks, which pumped up the economy with fresh loans during the pre-congress period while regulators paid lip service to controlling financial risks.

In the latest report for December, the banks appeared to show more restraint after strong GDP growth of 6.9 percent for the year had been assured.

For the month, new yuan-denominated loans fell 44 percent from a year earlier to 584.4 billion yuan (U.S. $92.4 billion), the lowest since April 2016 and far below forecasts, Xinhua said.

New lending of 13.53 trillion yuan (U.S. $2.1 trillion) for the full year rose nearly 7 percent from a year before, according to People's Bank of China (PBOC) data. Total social financing, comprising credit and liquidity in the economy, climbed 10.2 percent.

While the central government pursues its policies, critical decisions on production and the environment are often made at the local or provincial level.

The priorities are reflected in data for the northern industrialized province of Heilongjiang, for example, where steel output soared 29 percent last year and PM2.5 concentrations rose 10.4 percent.

Andrews-Speed said further study is needed to evaluate the forces behind the emissions results from 2017.

"What we need is a decomposition analysis ... to identify the relative roles of GDP growth rate, economic structure, industrial output and technological improvement," he said.

Greenpeace has urged the MEP to release guidelines for the next phase of its air pollution action plan "as soon as possible."