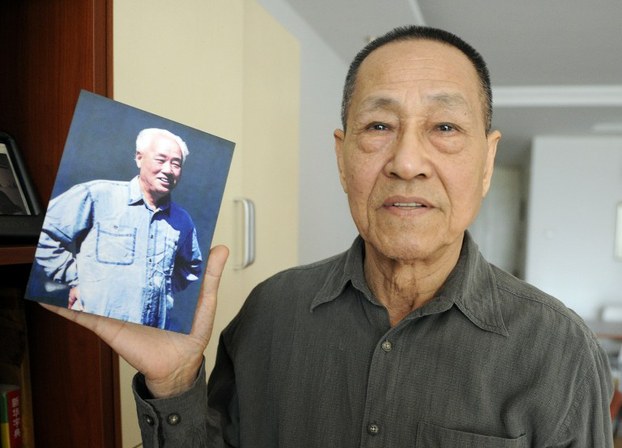 Bao Tong shows a photo of his former boss former Zhao Ziyang at his home in Beijing in a file photo.

If proverbs are shorthand for real life, then this year's parliamentary sessions were the proverbial pot of congee that is fouled by a single rat dropping.

The congee, of course, refers to the annual meetings of the National People's Congress (NPC) and the Chinese People's Political Consultative Conference (CPPCC) [held from March 3-15].

And the rat dropping is the list of 21 banned topics issued by the [ruling] Chinese Communist Party's central propaganda department to journalists covering the parliamentary meetings.

They weren't allowed to write about smog, although it's clearly the talk of the whole country.

Neither were they allowed to write about the economy, other than to say nice things about it. Doubts and other news was a no-go area.

Even tighter strictures were laid on the reporting of religion. For example, they couldn't criticize or question the removal of crosses from thousands of churches across a single province, which I imagine is supposed to be a commendable feat.

I wonder who exactly came up with these 21 banned items. Nobody has admitted doing so. Perhaps they want us to be uncertain.

But if, as we all know, the media belongs to the party, then such directives are unlikely to come from outside it.

So the meaning of the rat dropping is that any news or opinions that the party doesn't want to hear are forbidden.

And the effects of this directive don't end with the media. They will have inevitably had an impact on delegates to the NPC and the CPPCC, and on those who run it and report to it.

If the powers that be have already dictated what shall not be said, then why would the NPC and the CPPCC bring trouble down on their own heads by debating those things in a logical and persuasive manner?

It would be surprising if this sudden directive didn't also silence any voices outside the NPC and the CPPCC.

And so, a petition from 144 citizens calling on the NPC to open a public inquiry into the detention of large numbers of human rights lawyers since July 9, 2015 fell on several thousand deaf ears.

And when the governor of a province vowed to the NPC that no workers would be owed wages on his watch, and tens of thousands of miners with nothing to live on took to the streets of a certain city in his province to denounce him as a liar, we heard nothing from the worthies of the NPC and the CPPCC.

So much money, time and, energy is spent on these parliamentary sessions. They could easily be a success. But all it takes is for a single rat to use the congee pot as a toilet; all it takes is one piece of shit—"banning different points of view"—and the whole thing is spoiled.

It's a stark and sad contrast to the theoretical retreats run by [then premier] Hu Yaobang in 1979, where no topics were off-limits for discussion.

They told people not to hold back, and things worked out pretty well, until [then supreme leader] Deng Xiaoping got a rush of blood to the head and imposed the four principles of socialism and four no-go areas on us.

That single rat dropping from Deng ruined the whole pot of congee.

Bao Tong, former political aide to the late ousted premier Zhao Ziyang, is currently under house arrest at his home in Beijing.

The annual springtime lianghui or Two Meetings of the communist government's rubber-stamp legislature could be summed up well in two words: ceremonial claptrap. It's an extremely arid simulation of a parliamentary process that somehow always agrees with whatever the party bosses have commanded.