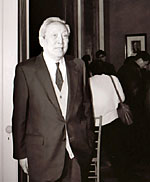 WASHINGTON—China's latest generation of leaders under President Hu Jintao and Premier Wen Jiabao came to power promising a more humane government, but hopes for a freer and more equitable society have plummeted since the succession, according to U.S.-based Chinese dissident Liu Binyan.

"When Hu Jintao came to power, people placed a lot of hope in him, as the policies he and Wen Jiabao introduced were referred to as China’s New Deal," Liu, a former editor at the official People's Daily newspaper, told Radio Free Asia (RFA).

"People thought Hu and Wen were much better than [former president] Jiang Zemin, and that China would be very different politically. But now things are even worse than before," Liu told RFA's Mandarin service in an interview to mark his 80th birthday.

"Going back to China now is asking for trouble," said Liu, who revealed to Different Voices host Jill Ku that he had asked Hu and Wen for permission to return to visit ageing and ailing relatives.

Liu said he had requested permission to return through "three absolutely reliable channels," and that Hu and Wen had received his request.

"But they acted as if nothing had ever happened, and so far there has been no response from them."

"I have learned from many sources that the authorities once thought of initiating a plan that would gradually allow those in exile to go back, but things have changed completely," Liu told RFA.

He said the return of an exile could cause trouble for loved ones. "If you go to visit a friend, you’ll bring trouble to him. The next day he’ll be summoned to give an explanation," he said.

The economy soared, but public morality degenerated, or you can say the soul of society was lost.

Liu said that since the ouster of former Communist Party chief Zhao Ziyang for sympathizing with the 1989 student-led pro-democracy movement in Tiananmen Square, no one within China's leadership had taken up Zhao's cause of greater freedom and openness in China's political culture.

"Many have been bought over," Liu said. "Their children have been given good positions, their families have moved into new apartment buildings, they have been provided with new cars, and so on."

Moral degeneration in the 90s

He said the decade following the armed crackdown on unarmed demonstrators had been characterized by moral degeneration. "The economy soared, but public morality degenerated, or you can say the soul of society was lost," Liu said.

Liu said he still saw potential for political change from within the ranks of government officials, should a broader social movement gain momentum.

I’d like to offer my congratulations to the venerable Mr. Liu Binyan on his 80th birthday...People around fifty years old like me miss Mr. Liu Binyan as well. He is highly respected as an amiable person and a man of integrity, unyieldingly pursuing freedom and democracy. His "Between Man and Demon" is known even to women and children on the mainland. At the time he, Wang Ruowang, and Fang Lizhi were expelled from the party because of the 1987 student movement, people were indignant at their unfair treatment.

"When things have become so critical that people in China are unable to survive, officials with some conscience or aspirations will stand up. This is not an idle dream," Liu said. "But it will emerge only under strong social pressure."

He said social forces outside the Party and government had grown in influence since he left China in 1988.

"There are more lawyers and journalists, and they are known as civil rights activists. Though many of them have been arrested, their successors are coming to the fore."

Wounds of upheaval hard to heal

"Earlier, I talked about those who were fired by their work units, but you can still count on them. We don’t quite understand how strong the social forces are, but as a whole, or in the long term, China has a future."

"However, it is by no means easy to heal the spiritual wounds inflicted on Chinese minds," said Liu, who said that a large part of China's problems—rampant official corruption, human rights abuses and growing social inequality—would not necessarily be solved by one-person-one-vote democracy either.

While he said former supreme leader Deng Xiaoping and other top Party leaders should bear full responsibility for the Tiananmen crackdown, which killed hundreds, possibly thousands, he said China's problems could not entirely be blamed on the communist regime.