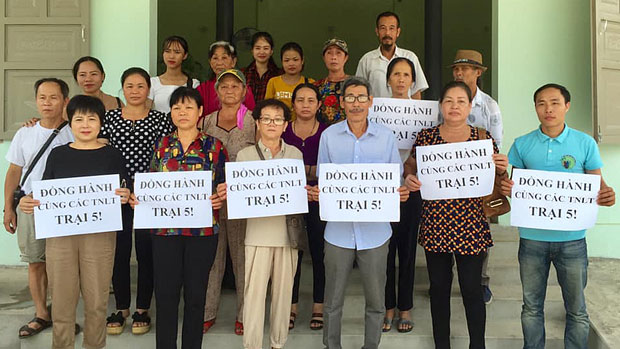 Family members hailed the anticipated release in August of jailed Vietnamese photojournalist Nguyen Dang Minh Man during a visit this week to her prison in northern Vietnam’s Than Hoa province, praising her courage behind bars during the last eight years.

Speaking to RFA’s Vietnamese Service on Wednesday, Man’s mother Dang Ngoc Minh, herself a former political prisoner, said that she and Man’s father had gone to Camp 5 along with other democracy activists and relatives of other prisoners, but had been made to stand outside.

“Once we arrived, about 30 to 40 police officers and other security personnel came out in a crowd, but because we didn’t do anything, they held back, and they just kept watch over us in a state of high alert,” Minh said.

“As only two people had been granted permission to go into the prison, the rest of us had to wait outside,” Minh said, adding that family members outside the prison held up a large banner reading “Greetings and Thanks to Nguyen Dang Minh Man, Steadfast in Prison for Eight Years!”

Convicted in 2013 of plotting to overthrow the government under Article 79 of the Vietnamese penal code, Man had worked as a citizen journalist to photograph anti-China protests in Ho Chi Minh City, also called Saigon, two years before.

Man is scheduled for release on Aug. 2 and is now eating only the food that family members bring her, fearing she may be poisoned by prison officials before she is freed, Minh said.

Two other prisoners held at Camp 5, Nguyen Van Dien and Nguyen Trung Truc, are meanwhile in failing health after going on hunger strike two weeks ago, members of the visiting group said.

Dien is serving a six-year,  six-month sentence for conducting propaganda against the state after distributing videos critical of Vietnam’s ruling Communist Party, and Truc—a member of the online advocacy group Brotherhood for Democracy—is serving a 12-year term following his conviction on a charge of subversion.

On June 30, Dien had called family members to say he intended to go on hunger strike the next day, but his phone line was cut off before he could tell his family why he was refusing food, sources told RFA in an earlier report

Also in June, at least five prisoners held at Camp 6 in north-central Vietnam’s Nghe An province went on hunger strike over poor conditions in detention, including the removal of electric fans from cells in the soaring summer heat.

Included in the group were Nguyen Van Tuc, arrested in Sept. 2017 and later handed a 13-year term for activities aimed at overthrowing the state; Dao Quang Thuc, convicted on the same charge in Sept. 2018 and sentenced to 14 years in prison; and Brotherhood for Demcracy member Truong Minh Duc, now serving 13 years for subversion.

Speaking to RFA on July 9, Duc’s wife Nguyen Thi Kim Than said she has appealed to the embassies of the U.S., Australia, and the European Union to send representatives to Camp 6 to see conditions in the prison for themselves.

“I would also like to know if [the prisoners] are still on hunger strike, and how their health is now,” Than said, adding that embassy representatives had told her they could not arrange a meeting at the prison but that they had regularly questioned Vietnamese government authorities on the need to ensure “minimum human rights for prisoners of conscience.”

“They said that the Vietnamese side always replies that they will ‘consider’ it,” she said.

Nguyen Kim Binh of the Vietnam Human Rights Network said in December however that the one-paprty communist state is currently detaining more than 200 political prisoners.