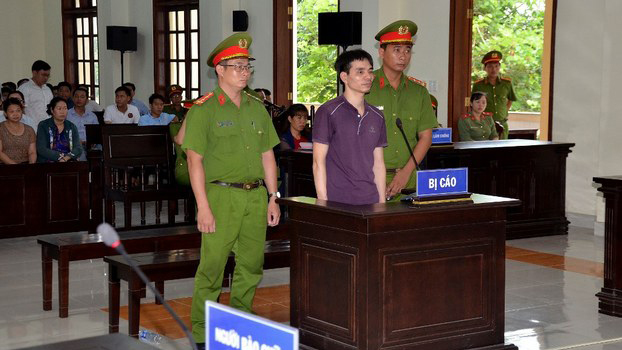 Detained Vietnamese environmental activist Nguyen Ngoc Anh has endured physical and mental persecution at the hands of his cellmate for the past two months as a means of coercion to drop an upcoming appeal in his case, his wife said Friday

Nguyen, a shrimp farming engineer, was arrested in August 2018 in Ben Tre province for making politically charged posts on Facebook.

He was convicted in June 2019 on charges of making, storing, spreading and declaring transmitted information and documents to combat the State of the Socialist Republic of Vietnam according to Article 117 of Vietnam’s 2015 Criminal Code. Nguyen did not accept the sentence and has appealed.

“He told me he has been persecuted for the past two months,” she said.

“The repression has become more severe as he has been waiting the appellate trial. He says the guards are asking him to plead guilty and give up the appeal,” she added.

According to her account, Nguyen claimed that his cellmate one day returned the cell with a length of parachute cord, which could be used in a strangulation attempt, in his pocket. Nguyen immediately informed the prison guards, but they forced him to accept that the parachute cord belonged to himself. Nguyen was then able to somehow successfully prove that it wasn’t his.

Nguyen Thi Chau said her husband told her he is prepared for his death and asked her to spread his ashes in three places: the sea where the couple make their home, the waters of Nha Trang where he went to university, and waters in her hometown. He also said that if he were to die in prison, authorities would never find the cause or the killer.

Also on Friday, Amnesty International called for urgent action to be taken in the case of activist Doan Thi Hong, who was arrested in September 2018 for disrupting public order under Article 118 of Vietnam’s penal code, and remains detained without trial. Hong is the mother of a 3 year-old- daughter.

Amnesty International called on the Vietnamese government to immediately and unconditionally release her, saying she was detained for exercising her right to peaceful expression only.

“I see that she is not well, so I asked her, but she only said that she had a stomachache,” she said.

“But my sister is probably too afraid to say she is not being treated for her illness. After the visit, the prison officials give me prescription drugs to buy, and I learned that my sister had a vestibular disorder, a skin condition and an eye disease,” said Doan Kim Khanh.

She added that when her sister first came to the prison, she asked officials to have her daughter with her but the officials denied the request.

Reported and Translated by RFA’s Vietnamese Service. Written in English by Eugene Whong.