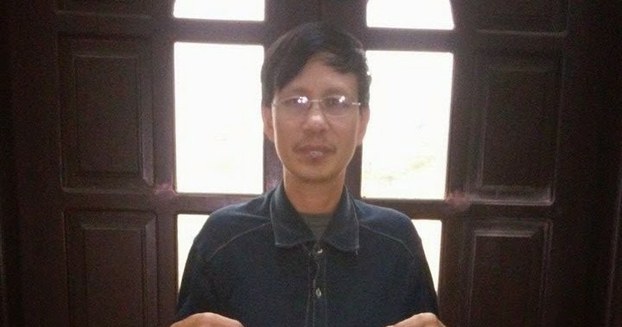 Political prisoner Nguyen Van Tuc, a member of the banned Brotherhood for Democracy Association in one-party Vietnam, is suffering deteriorating health in jail some nine months after his arrest, his wife told RFA’s Vietnamese Service on Thursday.

Tuc’s wife Bui Thi Re, and his mother visited him on Thursday at a detention center in Thai Binh Province. It was Re’s third visit since Tuc was arrested on September 1.

“When he was arrested, his hair was much blacker and now it has turned quite white. His heart disease makes him unable to sleep and eat in the current hot weather,” Re told RFA.

“He is jailed in a room without adequate ventilation and has only one small hand-made fan,” she said, adding “he looks so frail.”

Tuc, 53, was sentenced to 15 years in prison on April 10 on charges of subversion under the provisions of Article 79 of Vietnam’s penal code.

He had previously spent four years in prison after being convicted in 2008 of conducting anti-state propaganda under Article 88 of the penal code. He was freed in 2012 after serving his full term.

Communist Vietnam, where all media are state-controlled, does not tolerate dissent, and rights groups identify Article 79 as among a set of vague provisions that authorities have used to detain dozens of writers and bloggers.

London-based Amnesty International, which has called on the government to drop the charges against Tuc and other Brotherhood for Democracy activists, says that at least 97 prisoners of conscience are currently being held in Vietnam’s prisons, where many are subjected to torture or other ill-treatment.

Reported by RFA's Vietnamese Service. Translated by An Nguyen. Written in English by Paul Eckert.