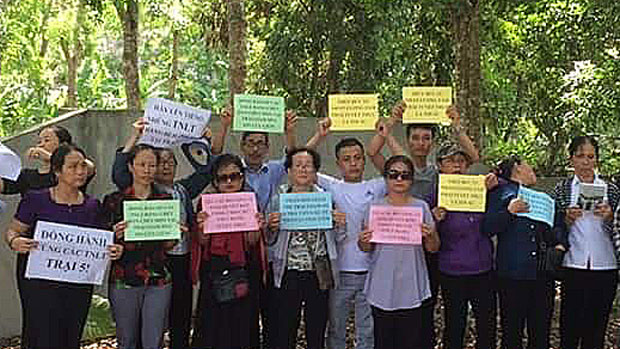 Social activists and relatives of political prisoners are shown on their visit to Camp No. 6 in Vietnam's Nghe An province, July 12, 2019.
Photo courtesy of Trinh Ba Phuong

At least three political prisoners at a detention center in north-central Vietnam’s Nghe An province have ended their hunger strike over poor conditions after they were given fans, but warned they will resume the protest if they are not provided monthly calls home, family members said Monday.

Tuc was arrested in Sept. 2017 and later handed a 13-year term for activities aimed at overthrowing the state, while Thuc was convicted on the same charge in Sept. 2018 and sentenced to 14 years in prison. Brotherhood for Democracy member Duc is now serving 13 years for subversion.

Tuc’s wife Bui Thi Re visited her husband on Monday and in a post to her Facebook page later in the day said she was informed that all prisoners had ended their hunger strike after fans were reinstalled in the camp on July 21.

But she said Tuc warned that the prisoners would resume the protest in August if they are refused the right to call their families once a month, as the law stipulates.

Re wrote in her Facebook post that prison officials told the prisoners they had been unable to call home in July because the camp’s phone lines are not working and are being repaired.

Thuc’s son Dao Quang Tung visited him along with other family members on July 17 and told RFA’s Vietnamese Service Monday that the fans will do little to dispel the heat prisoners must endure due to the corrugated roofs covering Camp No. 6’s cells.

“We asked if there was a need to buy a fan, but he said we did not need to because a ceiling fan had recently been installed,” Tung said.

“However, his cell is still extremely hot because of the roof.”

Duc’s wife Nguyen Thi Kim Thanh told RFA she knows little about her husband’s situation because he has been unable to call home and said she will have to wait until August to find out because she can only visit him once a month.

“Normally, he said, prisoners are allowed to call home between the 20th and the 25th, except for during the weekend, but I haven’t heard from him,” Thanh said.

Earlier this month, while the prisoners of conscience were still on hunger strike, Thanh told RFA she had appealed to the embassies of the U.S., Australia, and the European Union to send representatives to Camp 6 to see conditions in the prison for themselves.

Embassy representatives had told her they could not arrange a meeting at the prison but that they had regularly questioned Vietnamese government authorities on the need to ensure “minimum human rights for prisoners of conscience.”

On July 12, more than 20 social activists and relatives of political prisoners were attacked by assailants wearing civilian clothes when they attempted to visit No. 6 Camp, including Thanh, who was beaten and forced to walk from the camp while still recovering from a recent abdominal operation.

Nguyen Kim Binh of the Vietnam Human Rights Network said in December however that the one-party communist state is currently detaining more than 200 political prisoners.