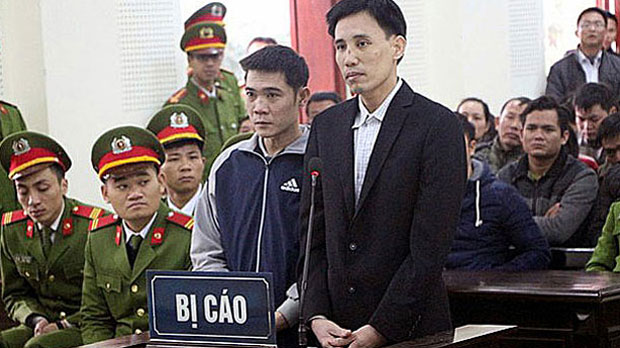 Jailed Vietnamese activist Hoang Duc Binh has been declared by prison authorities to be serving his prison term “badly” by refusing to confess his guilt or accept his sentence, his brother told RFA’s Vietnamese Service on Tuesday.

The judgment, delivered in an official notice signed by Col. Tran Ngoc of the An Diem Prison in Quang Nam province, and received by Binh’s relatives on Feb. 14, has resulted in harsher treatment for Binh, who is already suffering from rashes and failing eyesight from being held in a dark cell, Hoang Duc Nguyen said.

“Our family came to see him on Jan. 25-26, around ten days before the beginning of Tet [the Lunar New Year],” Nguyen said.

“When we met, he handed us a beautiful paper flower branch he had made, but the guard in his prison ward tore it to pieces right in front of him,” Nguyen said, adding that Binh had been left upset by the guard’s action.

The guard said that they wanted to check the inside of the paper flower, but Binh had refused because of the time it had taken him to make it, and because he wanted to give it to his family as a souvenir.

“[Binh} also said that he had written many letters to his family, but that the prison had never sent them,” Nguyen said.

Dragged from his car

A longtime labor and environmental activist, Binh was arrested on May 15, 2017, by police officers who dragged him from his car more than a year after protests over the government’s response to a waste spill the year before by a Taiwan-owned Formosa Plastics Group steel plant.

The spill killed an estimated 115 tons of fish and left fishermen jobless in four coastal provinces.

Binh was handed a 14-year prison term in February 2018 for “abusing democratic freedoms” and “obstructing officials in the performance of their duties” under Articles 257 and 258 of Vietnam’s penal code.

In July 2018, he was transferred without notice to his family from his prison in his home province Nghe An to another facility in Quang Nam province some 500 km (300 miles) away.

Binh, a blogger on environmental issues, had also served as vice president of the independent Viet Labour Movement and is a member of a soccer group that protests China’s territorial claims on the South China Sea.

Reported by RFA’s Vietnamese Service. Translated by An Nguyen. Written in English by Richard Finney.