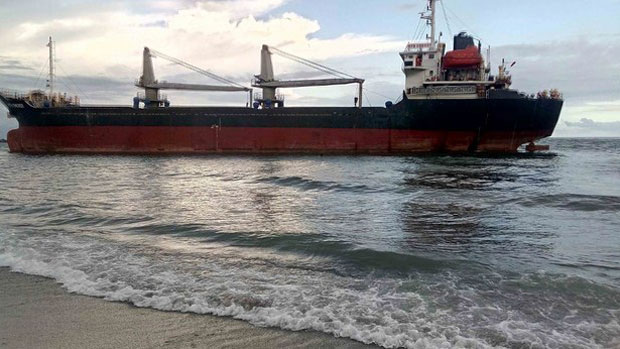 The Vietnamese cargo ship HTK Energy is pictured shortly after it ran aground off Sarangani Bay in the southern Philippines, June 18, 2018.
Environment Bureau, General Santos City

A Vietnamese cargo ship has run aground off Sarangani Bay in the southern Philippines, damaging more than 200 artificial reefs that were built more than 10 years ago by environmental conservationists, authorities said Wednesday. The ship, the HTK Energy, was carrying a cargo of rice when it hit the artificial reefs just off the coast along the bay on Monday, said Omar Saikol, assistant superintendent of the Sarangani Bay Protected Seascape, a government body tasked with protecting the local marine environment. The damaged reefs served as a habitat for various fish species, Saikol said, adding that authorities had arranged for divers to check the extent of the destruction.“There is an ongoing investigation. We’re getting video footage of the damage to facilitate the proper assessment and imposition of possible penalties or fines,” he told reporters in General Santos City on Wednesday.The artificial reefs, located just 20 meters (66 feet) near the shore, were constructed more than a decade ago by environmentalists as part of efforts to protect local biodiversity, said Katherine Lopez Bitco, a marine management specialist.“The damage is quite extensive and the area could reach 100 to 200 square meters [1,076 to 2,153 square feet],” Bitco said.In January 2013, a minesweeper owned by United States, the USS Guardian, ran aground on Tubbataha Reefs in the Sulu Sea, a protected marine sanctuary in southern Philippine waters considered a World Heritage Site by the U.N.The U.S. Navy hired a Singapore-based company to dismantle the minesweeper piece by piece so it would cause no further damage. The ship’s commanding officer and navigator were subsequently relieved and the U.S. government was fined at least U.S. $1.4 million for the damage.

Oh! Oops! Snap!!!
These people were graciously released our captive fishermen now y'all went and did this...Oh, jeez...bad...awkward!