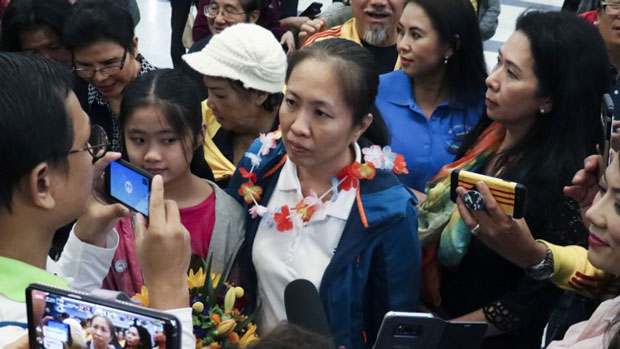 Vietnamese blogger and activist Nguyen Ngoc Nhu Quynh—known by her blogger handle Me Nam, or Mother Mushroom—arrived to a large crowd of supporters in the U.S. city of Houston and vowed to keep speaking out on human rights back in her communist nation.

Quynh, 39, won a surprise release from a 10-year jail sentence for anti-state propaganda on Wednesday, and flew to Houston with her elderly mother and two young children.

The Agence France-Presse (AFP) news agency said she smiled and spoke to a large crowd of friends and supporters, at Houston's George Bush airport after her arrival before midnight on Wednesday.

"I will continue to raise my voice until there is human rights in Vietnam, real human rights," she told AFP by phone before getting into a car with her family.

"It was time for me to think of my family, I made this final decision (to leave) for the future of my two kids," AFP quoted her as saying.

AFP quoted the U.S. embassy in Hanoi as saying Quynh had requested to go to the United States if released.

"We will continue to call on the government of Vietnam to immediately and unconditionally release all prisoners of conscience," embassy spokeswoman Karen Tang said, according to AFP.

The release came shortly after U.S. Defense Secretary Jim Mattis left Vietnam after a brief visit, but it wasn’t clear if he played any role in securing Quynh’s freedom.

Arrested in October 2016, the 39-year-old Quynh was sentenced in June 2017 to 10 years in jail on charges of spreading “propaganda against the state” under Article 88 of Vietnam’s Penal Code.

Quynh's detention, during which she staged several hunger strikes, was one of the more high profile cases of activists handed heavy sentences as part of an ongoing crackdown by the one-party state in the Southeast Asian nation, which holds more than 100 political prisoners and adds more  to the list every week.

Her release was welcomed by rights groups who had long championed her cause, but they also said she should never been in jail to begin with.

“We are overjoyed to learn that Mother Mushroom has been released,” said James Tager, Deputy Director of Free Expression Research and Policy at PEN America. “Of course, she should never have been in prison in the first place, as blogging is not a crime.

“We encourage the Vietnamese government to act to release the dozens of other bloggers who have been similarly imprisoned for their online expression,” Tager said in a statement.

Other Vietnamese bloggers said Vietnam appears to have adopted a policy of sending critics into exile or using them as diplomatic bargaining chips. China’s communist regime used a similar tactic with jailed dissidents in the 1990s as it lobbied to enter the World Trade Organization and to host the 2008 Olympic Games.

“I think this is a new policy of the government of Vietnam. They use political prisoners to bargain with other governments. For example, we release this person, we can gain something else like signing a trade deal or buying weapons,” blogger Truong Duy Nhat told RFA’s Vietnamese Service.

“They think if they can get rid of us then they won’t have to worry too much. However, after I left Vitenam, I still do a lot (for democracy) in Vietnam. I think after Nguyen Ngoc Nhu Quynh comes, she and her blogger network will continue bring their voices to more fora,” said Nguyen Van Hai.

Quynh had blogged about human rights abuses and corruption for more than a decade, and more recently voiced criticism over Vietnam’s policy toward China’s territorial claims in the South China Sea.

She has also criticized the government’s response to a 2016 toxic waste spill by a Taiwanese firm that destroyed the livelihoods of tens of thousands of Vietnamese living in four coastal provinces.

Quynh received the International Women of Courage Award in 2017, presented to her in absentia by U.S. First Lady Melania Trump.

Authorities have long targeted activist writers and bloggers in an ongoing crackdown in one-party Communist Vietnam, where dissent is not allowed.

Huh?
The guy below makes no sense and he doesn't comprehend what he just read either!
The article states that US Dept isn't sure if it has any part in her release...clearly above. So, what's this guy problem?
No, USA still has her problems, but it's FREE of communism and that's more than enough for its citizen to thrive.
I have being here since '75 and I haven't seen any migrated group that fares so well than the VNmese people. Hence, they so much richer whenever they returned to VN! You have witnessed and known that all along, don't you?
Then why the dumb remarks?
BTW, don't use the term Amen as if you know its true definition.

I thought you don't believe in God.

It's funny how the USA acts like a hero and help freeing bloggers. Wow, that is so surprising. Now, there will be people buying into this notion that the USA is a hero. Hopefully I will not end up brainwashed as they are. AMEN!