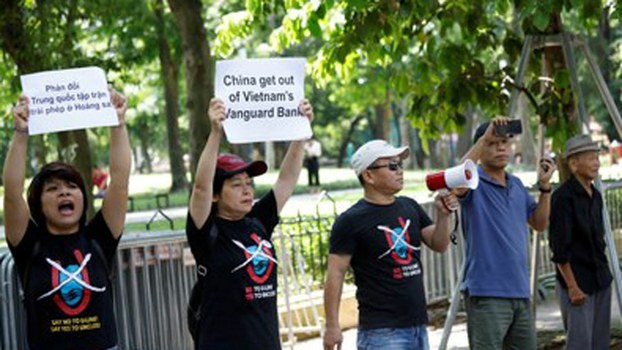 A group of Vietnamese activists have written an open letter urging the communist government in Hanoi to stop harassing people who wear a T-shirt that protests China’s expansive claims on the South China Sea, RFA’s Vietnamese Service has learned.

The activists, members of the civil society organization the Le Hieu Dang Club, published their open letter on Nov. 14 calling on the Vietnamese government to support the so-called “No-U” T-shirts and stop harassment of those who wear them.

“No-U” rejects a U-shaped line China puts on maps of the South China Sea to mark its sweeping claims over virtually the whole resource-rich body of water.

In published maps with a nine-dash Line, China claims nearly all of the South China Sea, called the East Sea by Vietnam. The Philippines, Taiwan, Brunei, Malaysia, and Vietnam also have overlapping territorial claims to the sea, which is vital to international shipping and trade.

“The government has no reason to ban the No-U T-shirts; they just put the wearers in difficulty,” Le Than, chairman of Le Hieu Dang Club, told RFA on Nov. 15.

“So the main purpose of the open letter is to inspire patriotism in young people, and at the same time to call for patriotism in policemen and security agents who have so far done wrong things,” he said, referring to detentions of people wearing the T-shirts and crackdowns on anti-Chinese protests.

“We tell them they are also Vietnamese with patriotism, so they do not need to listen to others’ orders against the patriotic acts of fellow compatriots,” Le said.

The No-U T-shirts show a U shape, crossed out with the words, “The Paracel and Spratly Archipelagos belong to VN” in Vietnamese, referring to the contested South China Sea features.

Actress Kim Chi, who also signed the open letter, told RFA that “everyone is indignant about the authorities’ brazen treatment of those who wear No-U T- shirts.”

“I myself have been interrogated by police when I brought the T-shirts to the Le Hieu Dang Club,”

“I asked them: ‘Do the Paracel and Spratly Archipelagos belong to China in their opinion?’” she said.

A Facebook commenter nicknamed Khai Nguyen from Bien Hoa province recently had his account blocked for a month because he posted a statement condemning a security official, Col. Do Anh Tuan, and other policemen who came to his house in a police car to confiscate the No-U T-Shirts, an activist named Ngo Thu told RFA.

Reported by RFA’s Vietnamese Service. Translated by An Nguyen. Written in English by Paul Eckert.

I know my tax withhold is paying RFA staffs but, covering useless news of 1/2 dozen jobless Vietnamese running around in T-shirts is beyond tactless fabrication and office boredom: a yell for "you're fired"!

We are proud for many good reasons, but mostly for our love of country and people. Our forefathers can hold their heads high and walk tall because they revolted and broke the steel chains of foreign invaders.
Today, the VCP have reverse the courses.
They have raised soulless goons to follow and carry out horrific crimes against our people w/out thinking or reasoning.
Meanwhile these VCP 'leaders' (if we can call them that!) have been paid and fed of China's table scraps for too long. How can ones think brightly if he/she is crawling under the master's table like dogs begging for crumbs?
Does this sounds like 'leaders' of a country?
Please, prove to us that you have some backbone.