Prominent Vocalist Who Sang of Uyghur Homeland Dies at 87 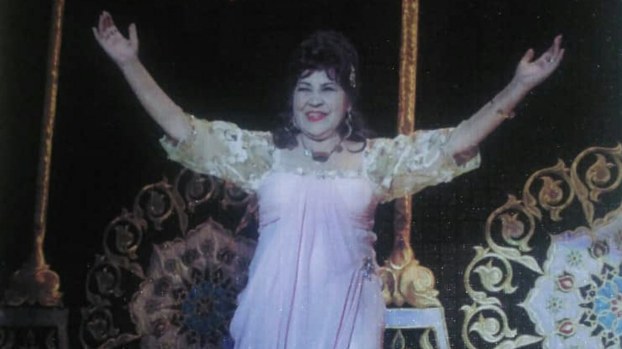 A photo of a promotional poster shows a performance by Ayturghan in Tashkent, Uzbekistan, in 2013.

A prominent Uyghur vocalist, who sang songs reminiscent of two short-lived independent Uyghur states in what is now northwest China’s Xinjiang Uyghur Autonomous Region (XUAR), died Monday at the age of 87, prompting her friends and fans to hail her as a cultural icon.

Born in 1933 in Ghulja (in Chinese, Yining), in the modern day XUAR’s Ili Kazakh (Yili Hasake) Autonomous Prefecture, Ayturghan Hesenowa began performing at the age of 12, and later went on to undertake professional voice and singing lessons under prominent Uyghur musical artists in the 1950s.

Uyghur independence fighters had in November 1933 declared the first East Turkestan Republic in what is today the XUAR’s Kashgar (Kashi) prefecture after breaking away from the Republic of China—a state that was to last for just over two months before the prefectural seat was sacked by Hui Muslim warlords aligned with the nationalist Kuomintang government in Nanjing.

A second East Turkestan Republic based in Ghulja was formed in late 1944 through a Soviet-backed rebellion against Kuomintang rule which lasted for slightly more than five years before it was absorbed by the Communist Party-led People’s Republic of China in late 1949.

The sense of autonomy and self-determination Uyghurs had experienced during the era of the two republics played a formative role in Hesenowa’s upbringing and musical education, and she soon became loved as a Uyghur classical and folk singer for her ability to adeptly convey those feelings in song to fellow members of her ethnic group.

When she began performing professionally in Ghulja in 1947, Ehmetjan Qasim, the head of the second East Turkestan Republic, called her “a true singer and future nightingale of the Uyghur people.”

But while she was praised for her performances within the Uyghur community, Hesenowa faced persecution at the hands of Chinese authorities for lyrics deemed politically sensitive and seen as promoting separatist ideology, leading her to flee China for the Soviet Union in 1962 along with tens of thousands of other Uyghurs and Muslim minorities.

In 1970, Hesenowa was invited to be lead singer of the Uyghur Song and Dance Ensemble of the Uzbek Soviet Socialist Republic’s Radio and Television Committee in the Uzbek capital Tashkent, compiling and performing the 12 Uyghur Muqam Classics together with other prominent vocalists, including Sultan Memet, Qadir Razi, and Erkin Yusupov.

Hesenowa mostly lived in modern day Kyrgyzstan, but also regularly performed throughout her career in what is now Uzbekistan, Kazakhstan, and even the XUAR capital Urumqi.

The Soviet government released Hesenowa's first record in 1976, bringing her even greater fame and name recognition, and she was repeatedly awarded by the government of the Uzbek Soviet Socialist Republic for her extraordinary contributions to music and the performing arts.

Following the collapse of the Soviet Union in 1991, Hesenowa found renewed popularity within the XUAR for songs including “Do You Miss Our Nation?” which were regularly covered by local artists, and continue to be loved by Uyghurs today.

Prominent Uyghur songwriter Ablahet Islamov, who composed “Do You Miss Our Nation?” and another track entitled “Path of Life” for Hesenowa in 2001, told RFA’s Uyghur Service that he produced her first record, “Songs For Late Autumn,” with “the goal of preserving her singing style, as well as Uyghur traditional singing, for our people.”

“A performing artist must be recognized firstly by her own people. Ayturghan was universally recognized by the Uyghur people because she was born to sing,” Islamov said.

Sumbat Gheniyarova, the director of the Republican Uyghur Theater in Almaty, Kazakhstan who worked with Hesenowa for many years, told RFA that the protagonist of her book, entitled “Performing Artist,” is based on the life of the Uyghur singer.

“Her love of her homeland was expressed in her singing, and she never would have become so well-known if the songs hadn’t come from her heart,” she said.

“The unique power in her songs comes from love—love of the motherland. She expressed her love of her motherland through her art. That is why nobody can emulate her—she was the one-and-only.”

Hesenowa died Monday in Tashkent after spending more than 70 years of her life professionally performing songs loved by both Uyghurs inside of the XUAR and throughout Central Asia.

As a result of her songs are the Uighurs independent yet?