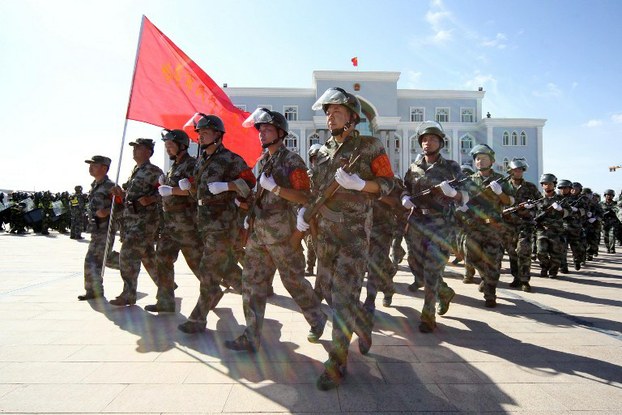 Faced with growing tensions in its far northwestern region of Xinjiang, China has built a large complex of prisons outside the regional capital Urumqi, sources say.

The seven prisons, all placed next to each other, were constructed in the Xinshi New City District just north of the capital, one prison official recently told RFA’s Uyghur Service, speaking on condition of anonymity.

“All of them were put together, and there are quite a few,” RFA’s source said.

One prison alone holds several thousand inmates, a former prisoner now living in Turkey told RFA, adding, “Jail number two is the women’s jail, and all the rest are for men.”

“The complex is located to the north of Urumqi in an area close to a special economic zone. It is like a city of jails,” he said.

The number of prisoners currently jailed in Xinjiang, a region torn in recent years by ethnic tensions between Han Chinese and the region’s mostly Muslim Uyghurs, is a closely guarded state secret, and reliable figures are hard to obtain.

Although the precise capacity of the new prison compound has not been made public, the facility is expected to house ordinary criminals as well those convicted of political offenses.

State media have reported recent efforts at expansion of Xinjiang’s prison network, with government-controlled website people.cn reporting in February that 100 officials would be hired to direct political education programs in the jails, and Xinjiang Jail Magazine saying in July that more than 700 recruits would be hired as guards.

Teng Biao, a Chinese human rights activist now living in the U.S., said that China’s construction of such a large complex of prisons near Urumqi reflects Beijing’s concerns over unrest in the politically sensitive region.

“In the Uyghur region and in Tibet, unarmed people are violently suppressed, and these kinds of tactics will only increase tensions in Xinjiang.”

China has vowed to crack down on what it calls religious extremism in Xinjiang and conducts “strike hard” campaigns including police raids on Uyghur households, restrictions on Islamic practices, and curbs on the culture and language of the Uyghur people.

While China blames Uyghur extremists for terrorist attacks, experts outside China say that Beijing has exaggerated the threat and that repressive domestic policies are responsible for an upsurge in violence that has left hundreds dead since 2012.

Good plan... making sure it large enough to hold all of the communist members. When the People in China stand up to ask for their freedom, communist will have to paid for their sins.