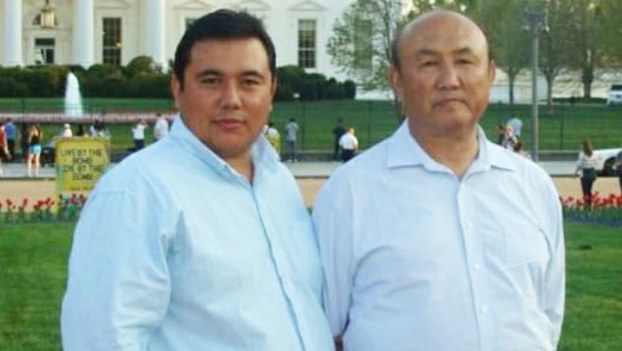 Iskender Memet (L) and his father, Memet Abdulla (R), at the White House in Washington, in an undated photo.

Authorities in northwest China’s Xinjiang Uyghur Autonomous Region (XUAR) have sentenced the Uyghur former head of the region’s forestry bureau to life in prison despite nearly four decades of government service, according to his U.S.-based children.

RFA’s Uyghur Service reported in late 2018 on Memet Abdulla’s April 29, 2017 detention and charges the following month for being “two-faced”—a term regularly used by authorities to refer to Uyghur cadres who they say pay lip service to Communist Party rule in the XUAR, but secretly chafe against state repression of members of their ethnic group.

His U.S.-based son Iskender Memet and daughter Subhi Memet recently told RFA that the 73-year-old, who served as head of the XUAR’s State Forestry and Grassland Administration from 1993 until his retirement in 2008, was convicted in September 2019 and, following a rejected appeal in December 2019, was handed a life sentence in proceedings that were closed to his family members.

Abdulla, who had also served as mayor of Bayin’gholin Mongol (in Chinese, Bayinguoleng Menggu) Autonomous Prefecture’s Korla (Kuerle) city and led an administrative unit for the Tarim Basin from 1983-1993, was additionally forced to hand all of his assets over to the state, while his family was fined 4 million yuan (U.S. $575,000), the children said.

Iskender said that when his son was born in April 2017, his father wanted to travel to the U.S.—as he had several times before—to meet him, and had received permission from the Communist Party and government because of his high-ranking status.

Abdulla had a ticket for either April 30 or May 1, he said, and had left his apartment to buy gifts for his grandchildren, when he was met by officers from the Public Security Bureau who “took him away.”

Subhi said her older sister had attended Abdulla’s first trial in September last year, but that her mother was refused permission to enter the proceedings.

“The verdicts were things like ‘two-faced’ and ‘has designs on splitting up the country,’” she said.

“Apparently they used the fact that we’re here in the U.S. and that my father came on multiple occasions over several years as evidence of his ‘crimes’ … My sister said she asked if she could take a picture [of the court documents], but they refused. They wouldn’t agree to give them to her when she asked.”

Subhi said that her sister described Abdulla at the time as having “lost a lot of weight,” and that he had been led into the trial with cuffs on his hands and feet.

“It seems as though they didn’t give him any chance to defend himself, nor did they give his lawyer any real chance [to do that],” she said.

“My sister wasn’t able to actually ask my father how he was doing, but she did it through gestures and eye contact.”

According to Subhi, her family filed an appeal of the September conviction, but during the follow-up trial in December, her sister and mother were refused entry to the courtroom.

“The court held the trial, and then later they found out about the verdict from the lawyer over the phone,” she said.

Iskender told RFA that it was only in December that “we heard that he’d been sentenced to life in prison,” although as of late February, he had still been unable to obtain documentation of the verdict.

“They reportedly locked my father away for life and fined him 4 million [yuan],” he said.

“My mom’s pension, my father’s salary, their insurance, they cut all of it off. They detained my father and two or three months later they took all of their assets, the money they had in the bank. Additionally, there was some land I’d started developing in 1995. Apparently they took that too.”

Iskender said that he and his sister are worried about their father’s health, as he previously had kidney cancer, and currently suffers from high blood sugar and high blood pressure.

“Up to now we believed that things were going to get better … but now we’ve lost all hope in [the government],” he said, explaining why his family had decided to speak out about his father’s case.

“It’s definitely possible that [the authorities] will go and bother our family [now that we’ve spoken out], but we’re ready for that,” he added.

“I’m not waiting on hope to prevail. I accepted this interview request because I want to let the world know about my people, about the things that are happening to Uyghurs, about what has come of someone who worked so sincerely for the Chinese government for so long.”

Subhi said that she and her brother had stayed quiet because they believed that, after nearly 40 years of government service, her father would be shown leniency.

“He’s committed no crime, so we had the hope that he was going to be proven innocent, and we also worried that something might happen to our mother and our family [in the XUAR] if we tried to do anything [to draw attention to his case],” she said.

“We’ve spent the past three years under China’s pressure.”

The imprisonment of Abdulla demonstrates how not even long-time civil servants are safe amid a campaign of mass incarceration in the XUAR that has seen an estimated 1.8 million Uyghurs and other Muslim minorities accused of harboring “strong religious views” and “politically incorrect” ideas detained in a vast network of internment camps since April 2017.

Many targeted former officials have also ended up in the camps they have helped to populate, which Beijing initially denied the existence of, but last year changed tack and began describing the facilities as “boarding schools” that provide vocational training for Uyghurs, discourage radicalization, and help protect the country from terrorism.

Reporting by RFA’s Uyghur Service and other media outlets, however, indicates that those in the camps are detained against their will and subjected to political indoctrination, routinely face rough treatment at the hands of their overseers, and endure poor diets and unhygienic conditions in the often overcrowded facilities.

If the Uighurs did not go on a rampage, killing innocent Han people in 2009, none of these (re-education camps) would have happened. Uighurs and Muslims will never blame themselves, others are always wrong. Well, you Uighurs got what you asked for so don't blame others.