Officials plan to demolish buildings in Urumqi formerly owned by Rebiya Kadeer and her family.
2012-05-30
Tweet 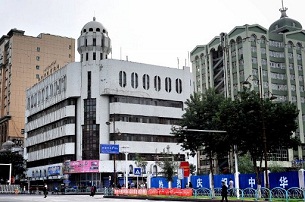 Officials in China’s northwestern Xinjiang region have forced exile Uyghur leader Rebiya Kadeer’s son to give up the family’s property, an overseas rights group said Wednesday, as Beijing increases the pressure on the activist’s family.

Alim Abdureyim, the imprisoned son of Kadeer, who is World Uyghur Congress (WUC) president, was compelled to sign documents handing over to the government two buildings in the regional capital of Urumqi, the WUC said.

Officials plan to demolish the Kadeer Trade Center, a business center Kadeer built in 1990, and the Akida Trade Center, formerly owned by her daughter Akida Rouzi, in a matter of weeks, relatives told the WUC.

The move comes as another of Kadeer’s sons, Ablikim Abdureyim, was transferred to a high-security prison.

Kadeer, a former businesswoman who came to the U.S. in 2005 after spending six years in jail in Xinjiang for "endangering state security," said she believed officials intended the pressure on her sons as retaliation against her advocacy efforts.

“My sons’ only ‘crime’ is their relationship to me—and because the Chinese government is no longer able to silence me, they are going after my family,” she said.

Alim and Ablikim Abdureyim were both arrested days after Kadeer was elected president of the World Uyghur Congress in 2006 and later sentenced on charges of tax evasion and “secessionism,” respectively.

Other members of Kadeer’s family who live in Xinjiang, including her children and grandchildren and their spouses, have been subjected to scrutiny by authorities.

Scrutiny on the family members increased following July 2009 ethnic violence that erupted between Uyghurs and Han Chinese, which Beijing accused Kadeer of orchestrating.

The move to demolish the family’s buildings follows the WUC’s biennial general assembly, held in Tokyo earlier this month, that sparked a diplomatic row between China and Japan.

Some 120 Uyghur representatives from diaspora communities around the world gathered in Tokyo for the meeting, which Beijing had told Tokyo not to host, saying that Japanese support for exile Uyghurs amounted to “interference in China’s internal affairs.”

Kadeer compared the pressure on her family to the case of blind Chinese dissident Chen Guangcheng, who arrived in the U.S. this month after fleeing house arrest in northeastern China and remains concerned about retribution against his relatives back in China.

“The time has come for Chinese leaders to end the unlawful, brutal mistreatment of our loved ones,” Kadeer said.

We support Kader's family. May God help them. History always writes the victory of the oppressed