Chinese authorities are still detaining a number of Uyghurs without charge after the Urumqi unrest.
2010-05-26
Tweet 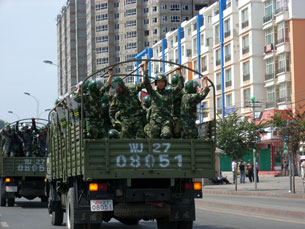 HONG KONG—New accounts detailing the detention of ethnic Uyghurs in northwest China in the wake of deadly unrest show how authorities have targeted members of the mostly Muslim minority, keeping them in custody without access to family and often without indicating when they might be tried or freed.

The first detention occurred on July 7, 2009, and involved four adult children from the same family in Bulaq Dadamtu village in Dadamtu township. The family’s patriarch, Turghan Polat, said his children have been imprisoned since then.

“The authorities arrested my daughter because they claimed she taught religious classes to other women in my neighborhood. My other kids were arrested because they were reading some kinds of [religious] books. I don’t know any other reasons. They have been in jail for almost 10 months,” he said.

“Some have said my daughter is jailed in Urumqi. All I have are the detention notices. I don’t have any official notice about my daughter's trial, how many years she got, or any explanation about her detention.”

Turghan Polat said his two sons and daughter-in-law are being held in the New Life prison, but said he is uncertain about their status.

“The police just gave me their detention notices a month after they were taken into custody. But they haven't been tried. The authorities haven't allowed me to visit them, but they allow me to send some money and food to the prison,” he said.

“The authorities said my kids were too religious—that was the main reason for their arrest. They accused my kids of covering themselves with religious clothes and undermining government-appointed imams by not going to certain funerals and religious ceremonies.”

Turghun Polat said he had visited the village committee recently to meet with the Party secretary and ask her opinion on how to proceed with his daughter’s case.

“I asked, ‘Where should I go for her? The authorities never told me where my daughter is or why she is in jail. It has almost been one year and they still have never explained the reason why my kids are in jail,'” he said.

On July 15, 2009, Setiwaldi Hashim, 40, and three members of his family were also detained in Dadamtu township for allegedly teaching religious classes without government approval.

Tiliwaldi said that the charges against his brother remain unclear.

“He was accused by the government of studying, teaching, and leading religious activities. But in his trial, the Ghulja city court didn't specify his crime—the judge accused him of reading some sort of book. I have no idea what kind of book he was reading,” Tiliwaldi said.

“Since then, the local authorities haven’t said anything about his crime. We contacted the police department and other officials to try to find out why he is still in custody without any charges. So far nobody is willing to answer our question,” he said.

Also detained was a father of three, Sultan Tursun, and his wife Helime on similar charges. Helime was released after 40 days and is now living with her children at her husband’s family home in Bulaq Dadamtu village.

Sultan Tursun’s mother said she is also unaware of the charges against her son, nearly one year later.

“We don’t know the reason why he was detained. One night [the authorities] came to his house and took him, saying he had received religious education from Setiwaldi, which is illegal because Setiwaldi doesn’t have government permission for religious teaching,” she said.

“Sultan knew how to pray five times a day for Namaz, but his reading skills are not good enough for reading the Koran. He only has a basic religious education.”

Sultan’s mother said authorities in Bulaq Dadamtu village had detained 11 youths from her neighborhood since last year, including her son, and that seven of them have yet to be released.

She said her son and his friends were charged as separatists and religious extremists during a court hearing that lasted around two hours. The accused were not given the right to defend themselves, even though they contested the charges.

“I don’t think they deserve to be jailed for such a long time. They might be sinners before God, but I believe that they’re innocent before the government.”

Dadamtu Police Station political commissioner Salahiddin said he was unable to answer questions about Sultan Tursun over the telephone.

A call to the Dadamtu Police Station front desk was answered by a police officer who gave his name as Mira.

Mira confirmed that Sultan Tursun had been detained, but he declined to provide details.

A woman from Bulaq Dadamtu village, who asked not to be named, said that even a year after the unrest, Uyghurs in Dadamtu township fear arrest and persecution by authorities.

She said that in the aftermath of deadly ethnic riots in the capital Urumqi and other areas of Xinjiang, Uyghurs in Dadamtu are also concerned about retribution from Han Chinese residents.

“Under the current circumstances, if the government and laws do not protect us, the people may kill each other. I have no idea about whether [the people detained in Dadamtu] obeyed the law or not. But I heard Setiwaldi and others were arrested,” the woman said.

“If the government accusation is correct, I think they must have done something wrong politically. I heard about what happened in Urumqi last July 5. We are worried about the future of our children—even now I am worried for them.”

Millions of Uyghurs—a distinct, Turkic minority who are predominantly Muslim—populate Central Asia and the XUAR in northwestern China.

Ethnic tensions between Uyghurs and majority Han Chinese settlers have simmered for years, erupting in July 2009 in rioting that left some 200 people dead, according to the Chinese government’s tally.