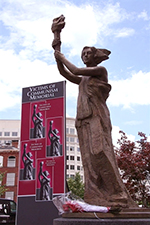 The Victims of Communism Memorial in Washington D.C., a replica of the Goddess of Democracy statue erected by protestors in China's Tiananmen Square in 1989, is shown during the memorial's dedication 12 June 2007. Photo: AFP/Karen Bleier.

WASHINGTON—In a tribute to the roughly 100 million people who are believed to have died under closed communist regimes, a U.S. foundation is building a “virtual museum” of their suffering on the World Wide Web—a monument in itself to openness and transparency.

The museum will be located on the Internet “because we want to particularly focus on getting all of these things to young people,” Dr. Lee Edwards, chairman of the Victims of Communism Memorial Foundation, said in an interview.

Targeting youth, savvier about Internet media than about world history, is a smart strategy, said Nguyen Chi Thien, a Vietnamese dissident poet who spent 27 years in prison in Vietnam.

“The younger generation, especially in the Free World, is not interested in politics and does not understand much about communism,” Thien said. “It is important to have an exact understanding of communism, and to know the true stories of real persons, to hear the stories of the victims of communism.”

The Washington-based Victims of Communism Memorial Foundation, authorized in 1993 by an Act of Congress, erected a statue last year in honor of what it says are the more than 100 million people who lost their lives to communist regimes in Europe, Asia, Africa, and Latin America over the last 100 years.

The younger generation...is not interested in politics and does not understand much about communism. It is important to have an exact understanding of communism, and to know the true stories of real persons, to hear the stories of the victims...

Funding for the new project is already coming in from ethnic communities in the United States, Edwards said. “The Vietnamese community, the Chinese community, and the Baltic community—I think those are probably the outstanding ones.”

The foundation now plans to create “what we think is going to be a first-class, a world-class, home page,” he said.

The home page will link to other museums around the world. These include Checkpoint Charlie, the Cold War-era border post dividing East and West Berlin, and the House of Terror, where Hungary’s communist secret police conducted interrogations in Budapest. It will also link to electronic archives at Harvard, Yale, and Stanford universities.

Canadian Web designer Marcus Kolga, whose parents fled the Baltic country of Estonia ahead of Soviet occupation in 1944, said the museum will include micro-sites not just for European countries but also for China, Laos, Vietnam, North Korea, and “for every single nation that has suffered under a communist regime.”

As the Web site is built, the foundation will monitor developments in the ongoing trials of the surviving leaders of Cambodia’s Khmer Rouge, whose 1975-79 rule resulted in the deaths of as many as 2 million people.

“We’ll be in touch with the Cambodian community here in North America and work with them to make sure that the Web site is updated with the most recent news regarding those trials,” Kolga said.

Kolga said that he grew up “hearing stories about Soviet repression and my grandparents’ friends who were tortured or murdered by the Red Army or the NKVD, [the Soviet secret police]. My grandfather was actually sent to the gulag in 1941, during the first Soviet occupation of Estonia.”

“I suppose it’s in my blood to continue building awareness and educating others about these communist regimes and how they’ve treated their people,” Kolga said.

Like the mass murders of Jews during the Nazi period, the killing of millions of so-called class enemies under communist rule should be regarded as “genocide,” a scholar of East European studies said last month in a public talk in Washington.

Speaking at the American Enterprise Institute, Dr. Norman Naimark—a senior fellow at Stanford University’s Hoover Institution—said the 1948 United Nations Convention on Genocide refers to “acts committed with intent to destroy in whole or in part a national, ethnical, racial, or religious group, as such.”

This list of defined victims was originally supposed to include “social groups” and “political groups,” Naimark said, but these references were dropped under Soviet pressure to gain a consensus vote at the U.N. for the final document.

From its very beginnings in the Soviet Union under Lenin, communist rule has been marked by “an almost unbelievable indifference to the suffering of others,” Naimark said. “It’s almost part and parcel of the Bolshevik mentality—that you just don’t care when people die.”

Original reporting by Richard Finney in Washington. Edited and produced by Sarah Jackson-Han.