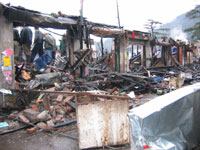 Scenes of devastation at what was once a busy Tibetan shopping and residential area in Dharamsala. Photo: RFA/Jigme

DHARAMSALA—Dozens of Tibetans living in the Indian town of Dharamsala have lost homes and livelihoods in a sudden blaze that swept through a residential and commercial complex.

The fire destroyed 16 residential apartments, shops, and a hotel in Mcleodganj. The town is home to the exiled Tibetan spiritual leader, the Dalai Lama, and his government.

The blaze started at around 3:30 a.m. Dec. 20 and swiftly ripped through the block, RFA's Tibetan service reports.

No one was hurt, but local residents lost property, possessions, and merchandise worth an estimated U.S.$228,000, local reports said.

"The shops numbered 1-10, and Kailash Hotel on the second floor and residential apartments on the ground floor got burned down," Yangzom, a member of a local retailers' association, told RFA's Tibetan service. 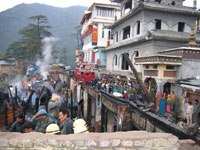 "They were lucky that they were able to get all the people to safety. But all the personal belongings and merchandise in the shops were destroyed," she said.

"We have again become refugees. Everything has been destroyed," hotel owner Lodoe Sangpo was quoted as saying by local media. "Even the clothes I'm wearing have been given by friends. I had to jump out of the window after removing gas cylinders," he said.

The local Indian District Commissioner visited the area and allocated 10,000 rupees (U.S.$228) in relief funds to each of the victims.

The Tibetan Minister of Education and Religion in exile, Thupten Lungrik, and members of the exiled Tibetan parliament also visited the victims and promised assistance.

The local Indo-Tibetan Friendship Society also pledged aid to the victims, many of whom started their lives again from scratch after a perilous journey out of Tibet.

They were lucky that they were able to get all the people to safety. But all the personal belongings and merchandise in the shops were destroyed.

China has ruled out calls from the Dalai Lama for a greater degree of autonomy for his people under Chinese rule, saying he will play no role in Tibet's future.

Thousands of Tibetans are thought to risk the illegal border crossing into Nepal and India in search of a better education or the freedom to practice their religion without fear of harassment. Many end up in Dharamsala.

China's People's Liberation Army troops marched into Tibet in 1951. The Dalai Lama has recently accused Beijing of implementing policies of "cultural genocide" against the region and its Buddhist heritage.

China and the Tibetans