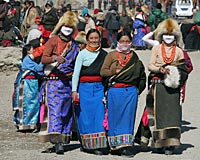 The slaughterhouse appears to be the Dege Longsheng Yak LLC, a subsidiary of Chengdu Ganzi Longsheng Meizi Yak Ltd. It was opened in 2004 by a Chinese entrepreneur and a county government official and is known among residents simply as “the Manikengo slaughterhouse.”

Sources who spoke on condition of anonymity gave largely consistent accounts, but officials contacted by telephone deny any such incident occurred.

According to the official Ganzi Net news Web site, attendees at the Oct. 17, 2004 opening ceremony included the deputy governor of Ganzi, known in Tibetan as Kardze, the Ganzi People’s Congress deputy chairman, the director of the Ganzi Bureau of Animal Husbandry, and the Dege County magistrate.

Sources said the crowd that converged on the building in August appears to have been especially large because the incident occurred during a Tibetan horse race festival, which attracts thousands of Tibetans every year.

The Tibetans, some of whom say they were angry because the owners pressured them to sell their animals for slaughter at below-market prices, broke into the building and found what they described as a large number of animals, including dogs and horses, the sources said.

They then freed all the animals and set fire to the building, sources said. The extent of the damage and whether there were any casualties was unclear.

County police then moved in, beat some of the protesters, and took between 50 and 60 into custody, Tibetan sources reported in separate interviews. “Most were later released, but seven or eight are still in custody,” one source reported.

Accounts of the incident offer a rare glimpse of tensions between ethnic Tibetans and Chinese authorities in this remote and undeveloped region, under the administration of Sichuan Province since 1949.

Friction over the existence of the slaughterhouse is said to have been escalating for more than a year, with monastic leaders trying to buy the property and the Chinese owners refusing to sell it. At one stage in 2004, local residents said, the Tibetan community organized a boycott of the slaughterhouse.

“The local Tibetans didn’t like the idea of huge slaughterhouse in Dege County, [and] it had no business last year. Neighboring Pawon (in Chinese, Babeng) Township planned to sell them about 300 yaks, but the local nomads of Manikengo (Manigange) objected and the proposal was withdrawn.”

Kalsang Rinpoche, reincarnate lama of Dzongchen Monastery, and Khenpo Sherab Sangpo, abbot of Golok Seda Buddhist Center, together offered to buy the slaughterhouse for 100,000 yuan, one source said, but the owners refused to sell.

The owners of the slaughterhouse couldn’t be reached for comment.