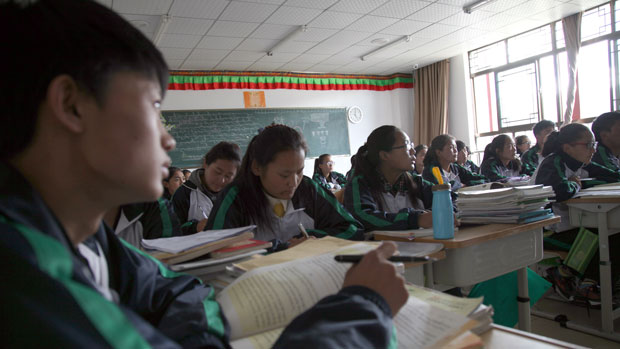 Tibetan students attend a language class at a school in Lhasa in a file photo.
AP

A growing emphasis on Chinese-language schooling in Tibet, though facilitating greater participation in China’s modern economy, is slowly destroying the cultural identity of Tibetan schoolchildren, according to a report released on Thursday by Human Rights Watch.

Drawn from interviews conducted in September 2019 with Tibetan parents and teachers in six rural townships in the Nagchu municipality in the Tibet Autonomous Region, the report reveals a pattern of pressure on local schools to give preference to classroom instruction in Chinese, even at the kindergarten level.

Thousands of non-Tibetan speaking teachers have now been hired from other parts of China to teach in Tibetan areas, with ethnically mixed classes promoted in the name of the unity of China’s “nationalities,” HRW says in its report, adding that authorities increasingly view local initiatives to promote use of the Tibetan language as “separatist” activities.

All of this makes the adoption by Tibetans of the Chinese language “largely inevitable, especially in urban areas, even without direct compulsion,” HRW said.

Speaking to RFA’s Tibetan Service in an interview, HRW China director Sophie Richardson said that when China’s “bilingual education” policy in Tibet went into effect around 2010, Tibetan schools were given the choice themselves of which language—Chinese or Tibetan—to teach in.

“But now, a decade later, we can look back and see that really now the majority of kindergarteners and primary school children are being exposed to primarily Chinese-medium instruction, largely at the expense of Tibetan-medium instruction,” she said.

The growing shift to classroom instruction mainly in Chinese appears to reflect a “perception on the Chinese Communist Party’s part that to speak a different language, to observe different cultural traditions, to have distinct religious practices, is somehow to be anti-central government,” Richardson said.

“And it’s worth pointing out that these policies are very  much in tension with Chinese law, and they’re clearly in violation of international law,” Richardson said.

Though many Tibetans agree that facility in the Chinese language is necessary in order to participate in parts of the country’s economy, “I think people feel very strongly that this lack of Tibetan-medium instruction really is an assault on their distinct cultural identity.”

Tibetans have a right not just to speak but to be educated in their own language, Richardson said, adding, “It’s not acceptable for a state to say you must, and from a very young age, only be or primarily be exposed to the majority language.”

“I think that this is yet another way that Beijing is essentially trying to eliminate distinct cultures. And I think the world needs to respond to that,” she said.