Brother of Tibetan Self-Immolator is Released From Prison in Sichuan 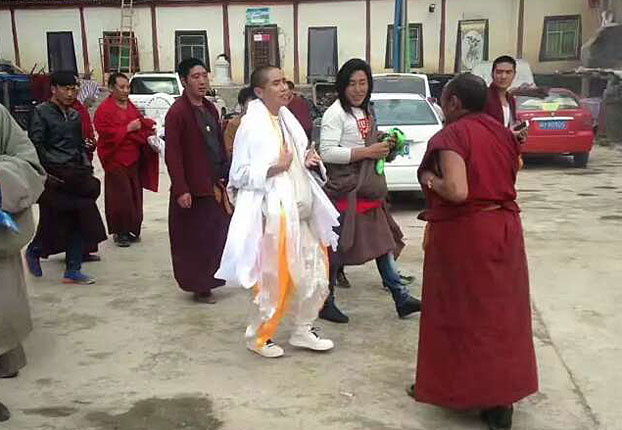 Chodzin is greeted by supporters the day after his release, Sept. 28, 2016.
Photo sent by an RFA listener

A Tibetan man sentenced to three years in prison after being linked to his sister’s self-immolation protest in southwestern China’s Sichuan province in 2013 has been released after completing his sentence, sources say.

Chodzin, whose sister Kalkyi burned herself to death in a challenge to Chinese rule, was freed on Sept. 27 and was taken by police back to his village in Dzamthang (in Chinese, Rangtang) county, a Tibetan living in India told RFA’s Tibetan Service on Thursday.

After hearing he was to be released, Chodzin’s relatives had traveled quickly to Sichuan’s Mianyang prison to welcome him home, the source named Gyape said, citing contacts in the region.

“However, they were not allowed to take him back,” Gyape said. “Instead, Chinese officials escorted him home.”

“The day after he returned, he went to the [nearby] Jonang monastery to pray,” Gyape said.

Chodzin appeared “lean and thin” on his release, but his actual state of health is still unknown, Gyape said.

Chodzin’s sister Kalkyi, a 30-year-old mother of four, set herself ablaze in Dzamthang’s Barma township on March 24, 2013 “to protest China’s policy of violent rule in Tibet and in Tibetan-populated areas [of Chinese provinces],” a local source told RFA in an earlier report.

“Chodzin was later accused of involvement in his sister’s protest and was sentenced to three years' imprisonment in Mianyang,” Gyape said.

“He was released after completing his sentence.”

Sporadic demonstrations challenging Beijing’s rule have continued in Tibetan-populated areas of China since widespread protests swept the region in 2008.

A total of 145 Tibetans living in China have now set themselves ablaze in self-immolations since the wave of fiery protests began in 2009, with most protests featuring calls for Tibetan freedom and the Dalai Lama’s return from India, where he has lived since escaping Tibet during a failed national uprising in 1959.