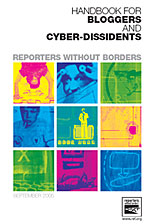 HONG KONG—An international media watchdog has published a guide to help citizen journalists and political commentators around the world dodge censors and avoid retaliation for what they write, especially in countries where freedom of expression is severely limited.

Paris-based Reporters Without Borders (RSF) releases the guide Sept. 22 in an attempt to put cutting-edge technical tips and editorial guidelines in the hands of the growing number of authors of Web logs—known as blogs—and other online commentaries.

"Or else they disturb and worry them. Some people distrust them. Others see them as the vanguard of a new information revolution."

Because [blogs] allow and encourage ordinary people to speak up, they’re tremendous tools of freedom of expression,

Varying in subject from daily diary entries of personal trivia and family new to top-flight political commentary and on-the-spot citizen journalism, blogs are rapidly gaining ground as a medium of expression not confined to the mainstream news values of the territories in which they operate.

"Because they allow and encourage ordinary people to speak up, they’re tremendous tools of freedom of expression," Pain said.

"Chinese media do not adhere to press freedom as standard, so real media should," Anti told RFA's Mandarin service. "It is now a big phenomenon in China that a large number of top-flight news professionals are becoming bloggers, making blogs a place where they can express views that cannot be published in traditional media."

Chinese cyber-dissident Sun Wenguang was asked about the need to protect a blogger's identity in case of political reprisals.

Security is of course one thing to consider in using anonymity, but anonymity renders less influence. In my case, I have been using my real name for a long time, which gives a sense of realness,

"Security is of course one thing to consider in using anonymity, but anonymity renders less influence. In my case, I have been using my real name for a long time, which gives a sense of realness," Sun told RFA.

"In the long run, I hope in China bloggers can be free to use their real names in expressing their points of view."

"If [bloggers] intend to take the position of a journalist, they must understand and abide by the Code of Ethics for Journalists," the commentator, identified only as Totoro, wrote.

"This is their biggest failing and impediment. This is why the abovementioned handbook for such categories of bloggers will be of most help."

Call for release of Vietnamese cyberdissident

In some instances, bloggers—such as like Baghdad residents during the Iraq war, or Louisiana residents during Hurricane Katrina—are able to contribute directly to the flow of information from news hotspots.

Blogs can also provide a valuable alternative perspective to anyone seeking to gauge the public mood on political issues of the day, especially in countries where mainstream media are severely limited in its scope.

"Bloggers are often the only real journalists in countries where the mainstream media [are] censored or under pressure," Pain said. "Only they provide independent news, at the risk of displeasing the government and sometimes courting arrest."

Bloggers are often the only real journalists in countries where the mainstream media [are] censored or under pressure,

The Guide For Bloggers and Cyber-dissidents will be available on the RSF Web site in English, French, Persian, Chinese, and Arabic.

It will include articles on anonymous blogging and protecting one’s personal identity in a hostile environment, editorial tips on maintaining journalistic credibility, and advice on writing, publishing, and publicizing a blog.

Iranian blogger Arash Sigarchi contributes a chapter, saying: "We can write freely in blogs," while Hong Kong-based Yan Sham-Shackleton blogs to keep a promise “to those who died.”

U.S.-based blogger Jay Rosen explains: "Now I can write what I think," while Ludovic Pierrat gives advice on how to ensure that someone else isn’t reading your e-mail.

As the cyberdissident handbook was launched, RSF called for the release of Vietnamese cyberdissident Nguyen Vu Binh, who begins his fourth year in prison on Sept. 25, 2005.

"Vietnam has recently brought out a White Paper on human rights in which it promises to observe freedom of expression and to promote the free use of the Internet," said a statement carried on the group’s Web site.

"Releasing Nguyen Vu Binh, imprisoned for three years for posting articles on the Net, would show that these statements are not simply window-dressing," the organization added.

Original reporting in Mandarin by Wen Jian and Xi Wang. RFA Mandarin service director: Jennifer Chou. Written for the Web in English by Luisetta Mudie and edited by Sarah Jackson-Han.