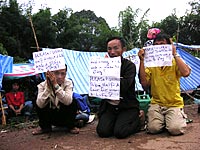 HUAY NAM KHAO, Thailand—Thousands of Lao Hmong asylum-seekers are scrambling for shelter in this northern Thai village after landlords began evicting them on orders from the Thai government.

The Thai government told landlords this week they had until July 10 to evict the estimated 6,500 would-be refugees from their bamboo shelters. Landlords were threatened with imprisonment or fines up to U.S. $1,200 for sheltering the Hmong, whom Bangkok regards as illegal immigrants.

Village leaders reported Friday that authorities had lifted curbs on the sale of food to the Lao Hmong. The group includes children and has been camped out since July 4 along the road near the village of Huay Nam Khao.

Several Hmong who asked not to be named said military officials said they would be deported unless someone came forward to "claim" them within five days.

As one human being to another, I feel deeply sorry for them. They’ve got no chance for a normal life. I don’t know the reasons. Look at how they have been living since they got here, without any help from anybody.

The Hmong say they will be persecuted by the communist government of Laos if they are repatriated because of their Vietnam War-era ties with the United States. Many Hmong fought under CIA advisers during a so-called "secret war" against communist insurgents in Laos.

In May, a refugee camp for ethnic Hmong in central Thailand was closed in what was hoped to be the last major movement of Hmong refugees.

Some 10,000 Hmong were relocated to the United States, with another 5,300 expected to resettle there by September, but U.S. officials say they have ruled out more mass resettlements.

The American Embassy in Bangkok is looking into the situation but has no plans to resettle more Hmong asylum-seekers in the United States, a spokesman for the U.S. State Department told RFA. 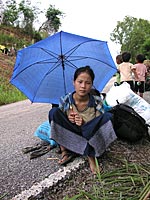 Hmong girl waits by the side of the road in Thailand. Photo © ; RFA

"We welcome assurances that the Thai government is providing basic assistance to the Hmong," Robert Hilton, spokesman for the State Department Bureau of Population, Refugees, and Migration, said. "We call on the Thai government to act according to international norms regarding any refugees that may be among this group."

A U.S. official who asked not to be named said U.S. authorities feared the latest resettlement, billed as the last, may have enticed other Lao Hmong to follow suit, hoping they too might win the right to resettle in the United States if they could get as far as Thailand.

In Bangkok, U.N. High Commissioner for Refugees (UNHCR) spokesman Giuseppe Devincent said UNHCR officials were following the situation and were “very concerned” about the Hmong.

"On June 16...UNHCR requested that the Thai government determine jointly with UNHCR the country of origin of these Hmong,” Devincent told RFA’s Lao service. “UNHCR has since then been following the fate of these people from a distance and has expressed concern to the Thai government." 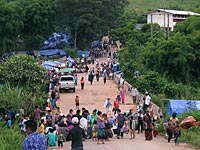 Hmong asylum seekers live by the side of the road since their eviction. Photo © ; RFA

Thai authorities have given assurances that the Hmong would receive humanitarian aid, including food and health care, he said.

One of the Hmong, who identified himself as Mong Va, said that the U.S. Consulate had sent an American doctor to the village and that the provincial governor had visited Thursday with rice and instant noodles.

"As one human being to another, I feel deeply sorry for them. They’ve got no chance for a normal life. I don’t know the reasons. Look at how they have been living since they got here, without any help from anybody," he said.

Some of the Hmong demonstrated Tuesday outside a government office near the village, located in Phetchabun Province 216 miles (345 kms) north of the Thai capital, Bangkok.

Laos won't take them back

Thai Foreign Ministry spokesman Sihasak Phuangketkeow meanwhile said Bangkok had no choice but to return the Hmong to Laos "as soon as possible."

"Under our law, we have to return them back to Laos," he said. "But you know, this will be done on the basis of humanitarian principals and certainly we will make sure that they are treated humanely."

"We’ll make sure that these Hmong will be safely returned to Laos. Thailand will begin deporting the Hmong back to Laos as soon as possible."

A Lao Foreign Ministry spokesman said that the Thai government hadn’t raised the issue through diplomatic channels and that Vientiane wouldn’t take the Hmong back.

"We will not take them, and it is not right for the Thai government to make the decision alone," the Associated Press quoted Yong Chanthalangsy as saying.

During the Vietnam War era, the Hmong in Laos sided with a pro-American government. After the communists won in Laos in 1975, many Hmong fled, fearing persecution.

More than 300,000 Lao, mostly Hmong, are known to have fled to neighboring Thailand, though most were repatriated or resettled in third countries, particularly the United States.

Although pressure on the Hmong has eased, military operations against small bands of Hmong insurgents in Laos continue and tensions persist.

The Hmong hope the United Nations will treat them as political asylum-seekers rather than economic migrants and help find them a home.

I feel that for this matter is the Hmongs are facing prosecution the UN needs to steps in, if its another war with thailand than so be it, we as Americans are known for saving others while in need, this needs to be completed by us. For what its worth there are people that are there that indeed needs out help. They help us in the Vietnam War, in return we shall help them.