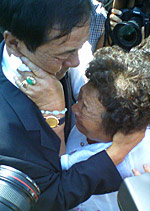 SEOUL--A South Korean fisherman has been reunited with his aging mother, 30 years after being abducted by the Stalinist North.

Koh Myungsop, 62, appeared dazed but happy as he greeted his tearful mother after arriving at the east-coast South Korean port of Jumunjin from China.

"Are you really my son, Myungsop? Let me see your face," 84-year-old Kim Younggi said when she saw her son for the first time after reporting him missing at sea in August 1975.

Koh said: "Mom, I still can't figure out how it all turned out like this." Later, he told reporters: "All my sickness went as soon as I was reunited with Mom."

Koh, who fought against communist forces between 1971 and 1973 in Vietnam, turned to squid fishing in civilian life, despite warnings from his mother that the job was dangerous.

He was kidnapped by the North Koreans together with crewmates aboard the squid vessel Chonwang in August 1975. His mother reported him missing immediately, but did not know what had happened to him until he wrote to her in 1997.

Appeals to the South Korean government were unsuccessful, but Kim eventually learned her son's whereabouts with the help of Choi Sungryong, head of an association for the families of abducted South Koreans.

Koh eventually escaped from North Korea in March 2005, and went into hiding in China. While there, he contacted his mother, despite fears of repercussions for the family he left behind in the the North.

Koh, who arrived in South Korea on Aug. 12, 2005, now hopes that arrangements can be made for his family to escape as well, he told RFA.

According to the South Korean National Intelligence Service, North Korea has kidnapped 486 South Koreans since the signing of the armistice at the end of the 1950-1953 Korean War, mostly fishermen and airline flight crews and passengers.

Only a handful have managed to return.