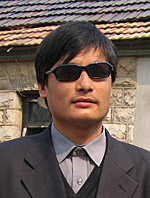 HONG KONG—A social activist who blew the whistle on official abuses under China’s one-child policy in the eastern province of Shandong was beaten by local officials Tuesday, while lawyers attempting to mediate with local government were set upon by unidentified thugs, residents and lawyers said.

Chen Guangcheng, who is blind, was left bleeding from his injuries on the main street of his native Dongshigu Village following clashes between villagers and local officials, a local resident told RFA’s Mandarin service.

The clashes were sparked after the arrival of three out-of-town lawyers—Xu Zhiyong, Li Subin, and Li Fangping, who were hoping to meet with Chen and mediate between the activist, who is under effective house arrest—and local authorities, an eyewitness said.

Chen was escorted from his home to where the lawyers had been prevented from entering the village, by around 20 fellow villagers from Yinan County, near Shandong’s Linyi City, where around 60 people were waiting, including government officials.

“Chen Guangcheng was bleeding from several cuts and injuries to his arms, and also sustained an injury to his leg,” a Dongshigu villager surnamed Chen said.

They got back to the village at around 4:30 p.m. They were on the main street around 300 meters from Chen’s house, when they were grabbed by a group of unidentified men and beaten up.

“One of his teeth was loose, too. The government officials refused to take him to seek medical attention, but they sent a doctor to get his blood pressure checked,” said the villager, who saw Chen shortly after the attack.

According to Chen’s Beijing-based lawyer Teng Biao, the three lawyers managed to see Chen for only a few minutes before they were taken away for a “chat” by local judicial officials. The lawyers tried mediate in the conflict between Chen and family planning authorities, but with no result.

“They got back to the village at around 4:30 p.m. They were on the main street around 300 meters from Chen’s house, when they were grabbed by a group of unidentified men and beaten up.”

“Li Fangping narrowly escaped being thrown in the river, and was pinned to the ground while others set upon him. Some his attackers looked as if they had just drunk a lot of alcohol. Xu Zhiyong was also pushed to the ground and beaten,” Teng said.

Chen is becoming widely known for exposing violence against women by Linyi municipal authorities in pursuit of family planning targets under China¹s one-child policy, with his work against forced abortions and sterilizations featured in the Washington Post in August.

His writings, which blew the whistle of the use of forced abortions and other abuses in Linyi City and his home county of Yinan, were widely distributed on the Internet and read by many in China.

In an interview earlier this year, a township-level family planning official from Linyi admitted that “illegal actions” had occurred in pursuit of draconian population targets.

“If people have more than the allotted number of children it affects the overall family planning results. Here in Shandong, each level of government has responsibility for overseeing the level below it...From the city level upwards, you start getting fines for exceeding the target,” the official said.

He said pressures on village officials exerted by the system of fines and quotas had led to beatings in the past, but denied that violence was sanctioned at every level of the family planning bureaucracy.

Chen fled harassment by Yinan officials last month, hiding at a friend’s house in Beijing, before being abducted for 38 hours by unidentified officials and taken back to Yinan.

He was threatened with spying charges for his role in highlighting abuses in the region, but later released.