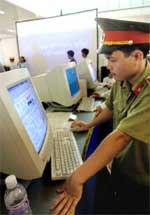 A Vietnamese policeman surfs the Web at an Internet cafe in Saigon. Photo: AFP

HANOI—Vietnamese authorities are increasingly concerned over growing support for a new dissident group known as Bloc 8406, which issued an impassioned plea for democratic reform to the ruling Communist Party earlier this year.

The group claims thousands of supporters, based on signatures collected throughout Vietnam to petition the authorities for political reforms. Among the signatories are former Vietnam People’s Army officer Tran Anh Kim and a prominent Catholic priest, Nguyen Van Ly.

Nguyen Manh Hung, director of the Indochina program at George Mason University in Virginia, said Bloc 8406 was trying to forge links between pro-democracy supporters in Vietnam and dissidents in exile. The Internet plays a key role in their strategy, he said.

I think they have learned very well from the Chinese. Like Jiang Zemin said, you must nip any movement in the bud.

“They have to use the Internet because the mass of the people do not know about these things. So they hope to reach the outside world to use the outside as a pressure group in case they get arrested, so they can get released or have the attention of the world,” Hung told RFA.

On Aug. 22, Bloc 8406 publicly declared a four-phase proposal for Vietnam’s democratization, including demands for the restoration of civil liberties, the establishment of opposition political parties, drafting of a new constitution, and democratic elections for the National Assembly.

Hung said the group is gambling that the government won't launch an all-out crackdown ahead of the Asia-Pacific Economic Cooperation (APEC) summit in Hanoi in November.

“Clearly they want to improve the situation of democracy and also because the APEC meetings are coming up, and they are guessing the government will not play havoc with them until after the meeting,” he added.

“I think they have learned very well from the Chinese. Like Jiang Zemin said, you must nip any movement in the bud. Right now the government is doing very little about this group, just maybe interrogating them, and they are waiting until after the APEC meeting.”

Recordings obtained by RFA’s Vietnamese service indicate that national security police interrogated at least two key supporters of the group in August, demanding proof of connections to overseas organizations and barring them from overseas travel.

They have to use the Internet because the mass of the people do not know about these things. So they hope to reach the outside world, to use the outside as a pressure group, in case they get arrested, so they can get released or have the attention of the world.

The two men, Pham Ba Hai and Nguyen Ngoc Quang, were questioned and released in August and then arrested on Sept. 7 and Sept. 2, respectively.

Two other men—Vu Hoang Hai and Truong Quoc Huy, both in their 30s—have also been arrested, according to sources in Vietnam. Officials have released no information about any of the four men since their arrests.

“We are Vietnamese security officers. We have an obligation to protect the Socialist Republic of Vietnam and its homeland security,” a national security officer who identified himself as Bui Huu Nghia, told Bloc 8406 supporter Pham Ba Hai, according to one recording.

Hai, 38 and a businessman, previously worked in India but returned regularly to Vietnam. He was barred from overseas travel after a meeting among Bloc 8406 supporters on July 27, at Non Nuoc restaurant in Ho Chi Minh City.

On Aug. 3, police from the Vietnam Immigration Department under the Ministry of Public Security summoned him for a first interrogation and called him back on Aug. 4. Those sessions were secretly recorded and the recording given to RFA’s Vietnamese service.

On Sept. 7, Hai was formally arrested while traveling in Vietnam with fellow Bloc 8406 supporter Le Tri Tue. His whereabouts since then are unknown.

“The intelligence information we have received indicates that you have connections with counter-revolutionary organizations to oppose and overthrow our government,” Nghia said during one of them August interrogation.

The agent told Hai, who had complained that he was unable to leave the country: “You’ve asked me about the reasons why we have blocked your exit. I’ve told them to you. The reasons have been the Bach Dang Giang organization and democratic Group 8406.”

Hai repeatedly acknowledged his support for the Bloc 8406, but denied links to another, more obscure organization known as Bach Dang Giang. No information was available about Bach Dang Giang.

Another Bloc 8406 member, Nguyen Ngoc Quang, was also interrogated and his interview secretly recorded. When contacted by RFA reporter Tra Mi in August, he heard the recording and confirmed it was authentic.

The core of this network is nothing else than an online petition, and the 8406 Group draws supporters from a wide range of interest groups in and outside of Vietnam.

During the interrogation, an unnamed security officer told Quang: “Your act of forming an organization is a violation of the law. I must tell you that it is unconstitutional. Being unconstitutional is extremely dangerous.”

“You have to admit that what you have done is wrong,” the officer said. “You must admit that it is against the Constitution. As to frustrations, everyone has his or her frustrations. Regarding your debate with me on freedom, democracy, mono-party, and things like that, I have no time for this. Also, I have no duty to do it.”

He told Quang to write down his frustrations and file them as an official complaint to the ruling Communist Party. “And I must tell you that debating takes a lifetime. It is, in fact, endless,” he added.

RFA refused to reveal to Quang the source of the recordings when he asked.

Quang told security police he had received a copy of the recording from RFA staff shortly before being called by reporter Tra Mi.

“Truong Quoc Huy called me and said, ‘You listen to it and recognize whether the voice is yours.’ I went to the place right opposite the security office of my apartment block.”

“I put on the earphones and listened. I told him that I recognized it as correct. I then asked the guy [Truong Quoc Huy], ‘Where did you get this tape?’ The answer was, ‘I can’t answer you yet.’”

Nguyen Ngoc Quang, 45, owns a private interior design firm in Ho Chi Minh City. He was called in for questioning by local police and officers from the Ministry of Public Security on Aug. 5 and 6.

Quang failed to report as ordered for further questioning on Aug. 7, 8, and 9, but he was questioned again on Aug. 10. All three interviews were also secretly recorded and released to RFA.

Quang was formally arrested on Sept. 2 in central Vietnam, when he was on his way to visit his father’s grave in Quang Tri province. His whereabouts since then are unknown.

Quang and Hai were among several hundred Vietnamese to put their names to a “Manifesto on Freedom and Democracy for Vietnam,” released to coincide with the Communist Party’s 10th National Congress, from April 18-25 in Hanoi.

Named after the date it was founded, April 8, 2006, Bloc 8406 appears to consist mostly of young, highly educated, and professional people.

According to Amnesty International, what began as a petition with just 118 original signatories, including prominent dissidents and former political prisoners from Hanoi, Hue, and Ho Chi Minh City, has swelled to include thousands of Vietnamese at home and abroad.

“The core of this network is nothing else than an on-line petition, and the 8406 Group draws supporters from a wide range of interest groups in and outside of Vietnam,” Amnesty expert T. Kumar told the U.S. Congressional Human Rights Caucus Sept. 14.

US Ambassador to Vietnam Michael Marine, speaking in Maryland Oct.2, said Washington supported the aims of Bloc 8406 in seeking greater freedom of expression and association.

“I think they are very brave people who are calling for political change, and I hope there will be greater space for people to express things like that,” Marine said. “Frankly right now the space is very constrained.”

“The kinds of things they're calling for...these are basic human rights that we support always. That kind of support is constant,” he added.

Australia Senator Gary Humphries has described 8406 as a nascent force, which “has already found some political support overseas in the U.S. Congress, and from the human rights commission of Britain’s opposition Conservative Party, which sent a researcher to meet key members in August and September 2006.”