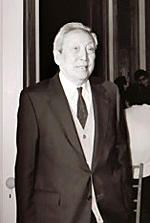 WASHINGTON—The veteran Chinese journalist and U.S-based dissident Liu Binyan has died at a New Jersey hospital after a prolonged battle with colon cancer. He was 80.

Friends and family rushed to his bedside late Sunday after he was hospitalized with a cancer that all along he believed he could beat, leaving him late in the evening when he appeared stable and comfortable, RFA’s Mandarin service reported.

Only his daughter, Liu Xiaoyan, was at his bedside when Liu died shortly after midnight Dec. 5.

Among those who visited him in his last hours were Yale Chinese lector Su Wei, his wife Zhu Hong, East Asian Studies Professor Perry Link of Princeton University, where Liu had worked after his arrival in the United States in 1988. The editor of the U.S.-based pro-democracy magazine Beijing Spring , Hu Ping, and renowned Chinese author Zheng Yi also visited.

'He said what had to be said'

“Liu Binyan had huge confidence in his ability to recover from his illness, tremendous faith in his will to live,” RFA reporter Bei Ming told listeners from the hospital in New Jersey where Liu died.

“And it wasn’t until very recently that his wife and daughter realized that he had got much worse. Liu himself didn’t realize it until he had pretty much lost the ability to speak. His last words were on the Sunday morning.”

“Su Wei had heard about it, and was rushing over from Yale to be with him. When Su Wei got there, he respected Zhu Hong’s wishes and pretended that he was on his way through to Princeton for a conference anyway, and was dropping in for a visit. And Liu Binyan simply said 'What a coincidence.' And then everyone else in the room realized that he hadn’t said those words lightly."

His funeral and cremation will likely be held at the weekend, with a much larger memorial event to be organized after that. His ashes are expected to return, finally, to China. Liu Binyan stayed at Princeton as a scholar from the time that he arrived in the United States, and also served as chairman of the Chinese Scholars’ Association.

He was a former chairman of International PEN, and of the Independent Chinese PEN writers’ groups, and acted as adviser to the New York-based Human Rights in China.

A mind for detail, and for the big picture

A former People’s Daily journalist who was expelled from the Party in 1987 for advocating free speech and carrying out reportage into official abuses of power, Liu joined the Chinese Communist Party in 1944 but was demoted and persecuted time and again because of his blunt criticism.

“Liu’s grasp on reality was much deeper than that of most journalists; there aren’t many people who could match his grasp of detail,” Link recalled in a panel discussion Monday.

“While everyone else was shouting slogans about rectification of the Party spirit, Liu Binyan was writing articles about corruption, with such analytic depth and clarity that he could pick up an example and write about it in such a way that people all around the country would know that he wasn’t just writing about Harbin; he was writing about an entire nation's problem,” Link said.

“There is a rather hard-to-pinpoint element to his spirit; his gift lay in his ability to analyze the smallest details and translate them into broad, sweeping themes.”

There is a rather hard-to-pinpoint element to his spirit; his gift lay in his ability to analyze the smallest details and translate them into broad, sweeping themes.

"His legacy lies not just in the works he left behind him, but also in his style of writing, which was an amalgam of journalism, literature, and opinion. This, we can see, has had a very deep influence on journalism in China today," Hu said.

“Another major contribution he made was his support for freedom of the press, to the extent that he himself became an icon of press freedom,” Hu said.

Born in the northeastern industrial city of Changchun in 1925, Liu became a Marxist as a young man, joining the Chinese Communist Party during the 1940s.

Condemned as a “rightist” during the 1950s for two novels critical of corruption and censorship in the new regime, he was sent into exile, then rehabilitated, only to spent eight years in a labor camp during the Cultural Revolution (1966-76).

My sole wish is that if fate gives me another 10 years, I'll make use of every single day of the 10 years to the best of my ability. I have really come to realize that life is precious.

Liu was expelled from the Party in 1987, and arrived in the United States just before the Tiananmen Square bloodshed of 1989.

After that, repeated requests to China’s leaders to return to his homeland were met with total silence, a source of continuing pain to Liu until the end of his life. In an interview to mark his 80th birthday earlier this year, Liu said he still hoped to write his “last book” in the time he had left.

“My sole wish is that if fate gives me another 10 years, I'll make use of every single day of the 10 years to the best of my ability. I have really come to realize that life is precious,” he told “Different Voices” host Jill Ku.

“Liu Binyan was a courageous Chinese journalist who believed deeply in bringing truth and honesty to his reporting,” Bob Giles, curator of the Nieman Foundation for Journalism at Harvard University, said in a statement.

“He paid a heavy price for his forthright critiques of the Chinese government," said Giles, whose program brought Liu to Harvard in autumn 1988. He was barred from returning to China when the fellowship ended in May 1989.