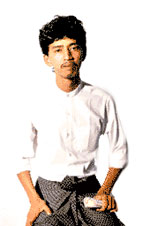 BANGKOK—A leading Burmese dissident just freed from 16 years in solitary confinement has said he believes “the dawn is breaking” in Burma and urged the country to work together toward a lasting political reconciliation.

“It’s like when you go to sleep and have a nightmare,” Min Ko Naing told RFA’s Burmese service, describing his 16 years in jail in the west of the country. “Then you see the light of the dawn but you go back to sleep and have to suffer through the nightmare again. But right now you can actually see the dawn breaking.”

Freedom was a surprise

...Right now you can actually see the dawn breaking.

“The prison authorities asked me for the number of my national registration card, and when I asked why they wanted it, the guards replied that it was for purchasing an air ticket so I could go home,” he said in an interview.

“When I was inside, I knew of efforts made by others to secure my release—they seemed like a distant light, whereas in jail it seemed that I was in the ice and snow… This tiny ray of hope gave me the will to hang on. How could I ever forget this? I am forever indebted for that kind of encouragement and hope,” he said.

Min Ko Naing said that he wasn’t asked to sign any papers restricting his activities in the future and that his health was generally fair.

“I have been in solitary confinement for almost 16 years, and so I have suffered mentally,” he said. “But I have tried to keep physically well, and so maybe my overall health is average.”

'A milestone has been reached'

Asked what message he would like to send his fellow pro-democracy activists, he replied, “It has been 16 long years and I’ve got a second occasion now to address my colleagues. What I would like to say now is mingalaba [good tidings], but as I came out on the road I saw tears in the eyes of mothers who have lost their sons, and strong men choking with sobs—and they all hugged me and cried.”

“I want to sweep away all these tears. Only when these tears are dried, when we can sweep these tears away, will I be able to tell everyone mingalaba . When someone comes to knock on a mother’s door late at night, it should only be the son who has gone out later than he should have. It shouldn’t be a person who has come to take the boy from his mother’s grasp.”

After all this time, a milestone has now been reached, and... we must name each individual person in prison... Then we must march toward our goal together.

“After all this time, a milestone has now been reached, and at this time, we must name each individual person in prison—the leaders, and all of our compatriots—and then we must march toward our goal together,” he said.

Min Ko Naing was jailed in 1988 at age 26, after he led nationwide student protests that were brutally suppressed by the junta.

'Reconciliation can be achieved'

The SPDC has now said it plans to free nearly 4,000 detainees, whom state-run media have described as having been “improperly” charged by the National Intelligence Bureau.

“After reconsidering the improper matters, the SPDC has stopped 3,937 prisoners from serving prison terms beginning today, 18 November, and will be releasing them from their respective prisons,” Radio Myanmar said.

In Kuala Lumpur, U.N. envoy to Myanmar Razali Ismail welcomed the junta’s announcement. “The numbers are big, quite exceptional, an impressive number of political prisoners including student democracy leader Min Ko Naing,” the Bernama news agency quoted him as saying.

“Sometimes we have to travel on uneven roads—there are potholes, there are bumps, and these roads must be repaired,” Min Ko Naing said.

“To repair those roads you sometimes have to make personal sacrifices—some are major, others minor. But we do this to reach national reconciliation. We’ve got to work together and hope for this. National reconciliation can be reached. It can be achieved, and we must work toward it.”

“I kept reminding myself that I wasn’t alone, and that even though the days were dark, my family and comrades were waiting for me outside,” said Min Ko Naing, whose real name is Paw U Tun. “I had to console myself that by thinking that so many of my friends suffered so much, and many died.”