Unusual incident reveals that successful recruiters are rewarded with money and rice.
2008-08-26
Tweet 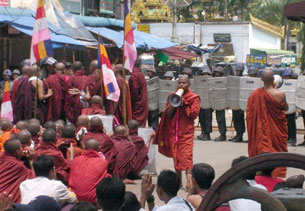 BANGKOK—Troops from Burma’s powerful military have made an unusual bid to recruit under-age Buddhist novices into the country’s armed forces, prompting an angry protest from the boys’ monastery in southwestern Burma, according to two local sources.

On Aug. 22, a lance corporal from the 534 communications battalion visited the Yadana Bone monastery in Mawlamyine Kyun township. He then left with two novices identified as Shin Aindaka, 13, and Aindaray Sara, 15, according to the sources, who spoke on condition of anonymity.

“This is the first time this has happened—the first time—and we are very surprised,” a source close to the monastery said. “The abbot feels that this is something that should not have happened. It amounts to an effort to deliberately destroy the Buddhist order itself. That is how we see it.”

"We couldn’t sit tight and do nothing."

“The abbot says that, whatever happens, the novices are under his tutelage and in fact he has to serve as a parent and is responsible for their well-being…This was a matter that needed to be reported and complained [about] everywhere—we couldn’t sit tight and do nothing. So the abbot had to start calling people up,” the source said.

When the monks found the two boys missing around 5 p.m., other young monks reported having seen a man coming regularly to speak with the novices, distributing booklets and urging them to go to another monastery, Kan Na.

The monastery then sent the father of one boy and a senior novice to follow up. A soldier who had been left behind said they were “just doing their jobs."

“When our abbot heard this he became angry and this time sent four monks,” the source said.

A battalion colonel who identified himself as Htay Aung later phoned and apologized, and the two novices were escorted back to the monastery in layman’s clothing early Aug. 24, the source said.

The boys’ parents were summoned, and the parents and children were again escorted away to sign papers but they remain with their parents, the sources said.

When the four monks returned, they said they had learned that soldiers receive 20,000 kyats and one bag of rice, and the five new recruitments can mean permission to leave the military, one source said.

Monasteries play a critical role in overwhelmingly Buddhist Burma. The country’s military and monks clashed openly in September and October 2007, when up to 100,000 people marched in support of democracy and against soaring inflation.

Rights groups say as many as 200 people were killed by the subsequent crushing of the demonstrations by the regime, while hundreds of monks and lay people are believed to remain in jail. The military frequently conscripts children into military service, but not Buddhist novices.