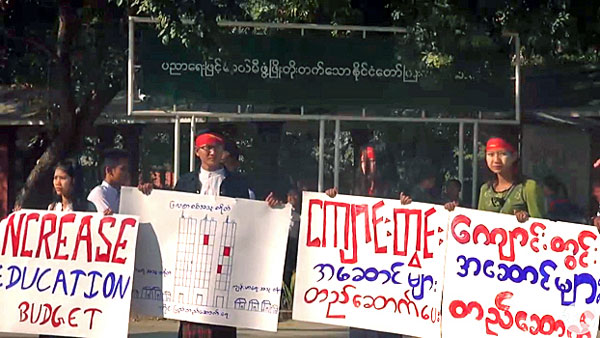 Myanmar students protest for an increase in higher education funding at Yadanabon University on the outskirts of the central Myanmar city of Mandalay, Jan. 23, 2018.
RFA

Forty-eight students enrolled in various universities in Myanmar were dismissed from their classes after they joined in the protest, with some vowing to stay out of school rather than promise not to demonstrate, sources say.

The four-day protest that began on Jan. 22 at Yadanabon University on the outskirts of the central Myanmar city of Mandalay was broken up by police three days later, though authorities briefly held more than 70 protesters before sending them home.

Aung Min, deputy director general of the Department of Higher Education, told RFA on Tuesday that the dismissals were ordered by university administrators, who also have the authority to decide whether to accept the students back.

“The Department of Higher Education hasn’t released any order to dismiss the students,” he said.

Myanmar’s Education Minister Myo Thein Gyi asked Aung Aung Min and the director general of the Department of Higher Education to meet with students who stayed at a protest camp, he said.

“The meeting was not successful, although we discussed the issue with students and members of parliament,” he said. “Because we are university teachers, we have to resolve problems through negotiations if we have more protests in the future related to this issue.”

The department has planned to provide four years of instruction rather than two to students training to be teachers, putting a further strain on the higher education budget.

“I have asked for what I need, but we must ask for funds incrementally, because I don’t know how much funding we have for [schools] in the entire country,” he said. “Only lawmakers know, and that’s why we told the students to talk with the parliamentarians. They met and talked, but the meeting was not successful.”

Meanwhile, more than 100 university students in Sagaing region on Tuesday called for the removal of the government’s ban on student-led protests, the readmission of the 48 suspended student protesters, and an increase in higher education funding.

“We are calling for justice, but we haven’t had any response from the government,” said Phyo Kyaw Thu, a member of the student union at Sagaing University of Education. “If we are ignored, we will continue fighting.”

The National Network for Education Reform (NNER), a coalition of educators working independently of the government education system, also said it opposed the suspensions of several students at Yadanabon University who took the lead in the demonstrations, the report said.

“NNER believes that the students exercised their freedom of expression by peacefully protesting,” said a statement issued on Monday. “Coercive detention and dismissal of student protesters from their respective universities is not in line with democratic traditions and standards. Such measures were used by previous dictatorial regimes.”

Student protestors were routinely imprisoned by the former military junta that ruled the country for a half-century, prompting international criticism from rights groups.

In January 2015, hundreds of students from across the country began marching from Mandalay to Myanmar’s commercial capital Yangon, demanding that the government amend the National Education Law.

They called for a decentralized education system, changes to university entrance exam requirements, modernization of the national syllabus, the right to form student unions, and instruction in the country’s ethnic minority languages.

More than 100 students and their supporters were arrested and jailed in February 2015 during a peaceful protest that turned violent when police attacked them in Letpadan in the Tharrawaddy district of the country’s Bago division, where they had stopped during their cross-country march.

They were later released after democracy icon Aung San Suu Kyi’s National League for Democracy took power in April 2016, though concerns persist over violations of the rights to freedom of peaceful assembly and expression in the formerly military-ruled country.

The passage of the National Education Law in June 2016 again angered student activists who said the law in its amended form failed to include key provisions they believed had been agreed to in government-sponsored talks.