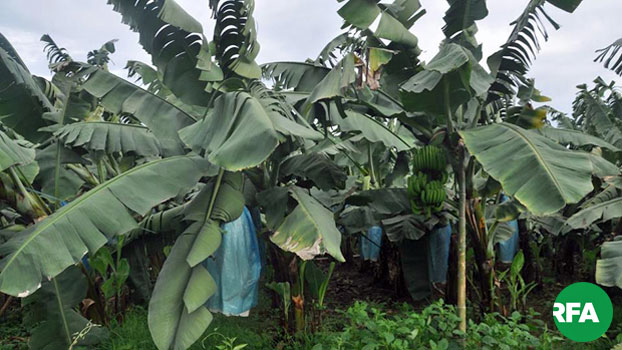 A view of a banana plantation in northern Myanmar's Kachin state in an undated photo.
RFA

Ten Chinese nationals were deported from Myanmar last month after having been discovered illegally staying in the country in connection with their work on banana plantations in Kachin state.

An immigration official in Kachin’s Waingmaw township said the 10 were handed over to Chinese officials on May 31, after paying a fine of 500,000 kyat (about $328) each. They were arrested for trespassing five days prior to that, but were deported after they were found to be in the country illegally.

An eleventh Chinese national was also fined the same amount and deported on the same charges June 3 after he was discovered following his involvement in a motorcycle accident.

“Ten of the 11 were arrested at the Sadon checkpoint and they were deported and handed over to Chinese authorities after the station charged them under Immigration Act Section 13 (1),” Waingmaw Chief of Police Kyaw Soe told RFA’s Myanmar Service in an interview.

He said the eleventh was also fined and deported on the same charges.

A separate group of nine Chinese nationals involved in banana plantation work are also facing deportation for the same charge and also for violating Forestry Act Section 40 (a), after being arrested in Nantwah and Washaung reserve forests last month, Waingmaw’s Forestry Department said.

They have all paid the same 500,000 kyat fine, but remain in the country to face the charges by the Ministry of Forests.

Three other Chinese nationals were charged with the same immigration offense on June 6, and were fined the same amount on Monday. They remain in Waingmaw police station and are awaiting deportation, according to the town’s immigration office.

Controversial China-backed tissue-culture banana plantations, banned in Laos and Thailand, began appearing in Kachin state about 12 years ago and have quickly expanded in Waingmaw township, which lies alongside the Irrawaddy River near the state capital Myitkyina.

A research report issued earlier this year by the local NGO Land Security and Environmental Conservation Network indicated that that there are more than 100,000 acres of banana plantations in the state’s Myitkyina and Bhamo districts.

State residents frequently complain about the downsides of banana cultivation, including the loss of farmland, deforestation, the destruction of natural habitats, low wages for laborers, and damage to their social and economic well-being.

Earlier this year, Kyaw Kyaw Win, Kachin state’s minister of agriculture, livestock, and irrigation, told RFA that officials had not issued permits for banana plantations, although some companies had planted banana trees on fallow land and on farmland where fruit trees are allowed to be grown.

At the time, he also said he would submit a proposal to the state government to set up a special committee whose subcommittees would look into illegal plantations and their impacts on the environment and local labor.