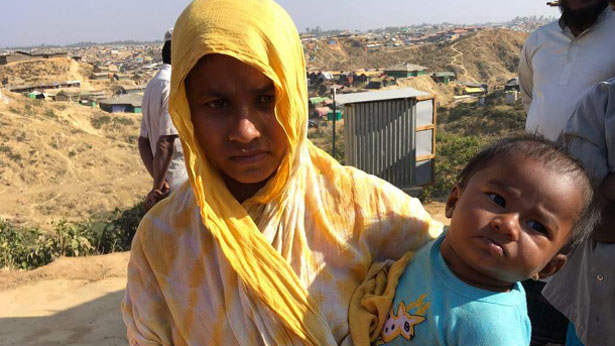 Jannat Ara, the wife of a Rohingya refugee leader who was abducted at the Kutupalong camp in southeastern Bangladesh over the weekend, stands outside their hut at a sub-camp there, Jan. 29, 2018.
BenarNews

Police are investigating the abduction of two Rohingya men in the refugee camps of southern Bangladesh amid allegations from an eyewitness that Rohingya insurgents snatched the pair.

The sister of a Rohingya camp leader at the sprawling Kutupalong refugee camp said dozens of men who identified themselves as members of al-Yaqin – also known as the Arakan Rohingya Salvation Army (ARSA) – dragged him and his brother away after tying them up and beating them on Sunday night.

“They are al-Yaqin members. They introduced themselves to us as Al-Yaqin members,” said Senwara Begum, the sister of camp leader Saif Ullah and Shawkat Ullah (also known as Surotullah). She said she witnessed their abduction after a group of about 100 people who wore traditional Burmese lungis, a sarong-like garment, surrounded their hut at a sub-camp at Kutupalong.

Saif Ullah is known as a Majhi, or camp leader, and oversees 152 Rohingya families who live in huts at Block EE of the sub-camp.

“They forcefully took my brothers by dragging them away. They beat up my Bhabi [brother’s wife] as she protested,” Begum told BenarNews, an RFA-affiliated online news service.

At least eight of the people who surrounded her family’s hut were ARSA members, she said.

“We knew them from Burma. My brothers did not support them,” Begum said, referring to Myanmar by its other name. She said she suspected that the men took her brothers to Balukhali, another refugee camp in Cox’s Bazar district.

ARSA is the rebel group that launched attacks on police and army posts in Myanmar’s Rakhine state, which provoked a brutal crackdown by the Myanmar military that forced at least 655,000 Rohingya Muslims to seek shelter in neighboring Bangladesh since late August 2017.

She asked the large group of strangers to identify themselves, but they ordered her husband to come out of the hut.

“As my husband and his brother went out, they started beating them. I started shouting. But nobody came to their rescue,” Ara told BenarNews.

The police in Ukhia, a Cox’s Bazar sub-district that houses the camp, confirmed that the two men were abducted.

They are investigating the case and launched three searches for the men at Kutupalong, Balukhali and another refugee camp in the area, but were not able to locate them on Monday, Maksud Alam, an officer-in-charge of investigations at the local police station, told BenarNews.

“We do not know who abducted them,” he said.

A security official posted in Ukhia who requested anonymity said some ARSA members have been active in refugee camps.

“The Majhis are very influential people in their blocks. ARSA is targeting the Majhis who would not support them. ARSA’s target is to expand its influence among the refugees,” the source told BenarNews.

The abductions came in the wake of three killings of Rohingya at the refugee camps since Jan. 13, which a local commander with Bangladesh’s Rapid Action Battalion security force had described last week as internecine conflicts between Rohingya refugees. At least two of the slain refugees were camp leaders.

“We are trying to find the culprits,” Alam said. “We are still investigating the incidents.”

Meanwhile, senior Rohingya leader Jafar Alam said ARSA has been trying to recruit youths to its ranks by luring them with false promises.

“Their motivation is ‘Fight for ARSA. If you die, you will step into heaven,’” he told BenarNews.

“ARSA is not a militant outfit. They are fighting to establish our rights,” Zohur Ahmed, a 24-year-old resident at Kutupalong, told BenarNews.

abductors be they ARSA or very likely Pakistan connected terrorists, that are creating problems for Banladesh