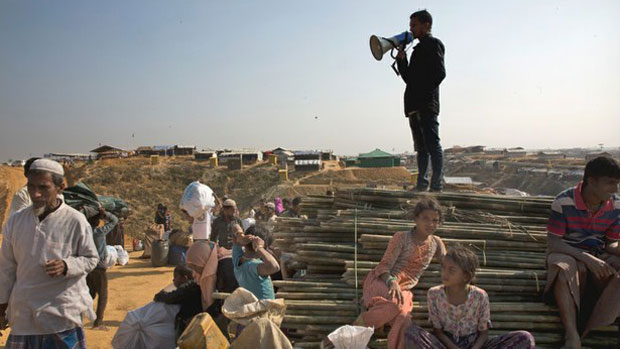 A Rohingya volunteer guides fellow refugees upon their arrival at the Balukhali refugee camp in Ukhia, a sub-district of Cox’s Bazar district in southeastern Bangladesh, Jan. 21, 2018.
AP

A Rohingya leader who had criticized ARSA insurgents and often interacted with Bangladeshi officials and visiting foreign dignitaries due to his language skills was slain in a refugee camp in southeastern Bangladesh, police and local sources said Tuesday.

The news came as the Bangladeshi foreign ministry confirmed to BenarNews that the U.N. secretary general and president of the World Bank would both visit Rohingya refugee camps in the southeast next month.

Arifullah, a leader at the Balukhali-2 camp in Cox’s Bazar district, was hacked to death on Monday, Mohammad Abul Khayer, officer-in-charge of the police station in Ukhia upazila (sub-district), told BenarNews, an RFA-affiliated online news service.

Myanmar’s security forces responded with a brutal counter-insurgency clampdown that engulfed Rakhine in violence and forced more than 700,000 Rohingya to cross the border into Bangladesh.

Just a day before his slaying, at least 10 Rohingya refugees were injured when two rival groups clashed in the same camp, according to Mohammad Atikullah, officer-in-charge of the police station in Teknaf, another sub-district of Cox’s Bazar. Two were in critical condition, he said.

Khandakar Masudul Alam, deputy chief of protocol at the foreign ministry, said Guterres was expected to meet with Rohingya in Cox’s Bazar either on June 30 or July 1.

“He will be accompanied by the World Bank chief during this visit,” he told BenarNews.

In April, a delegation from the U.N. Security Council paid an unprecedented visit to the Rohingya camps in Bangladesh.

The 24-strong delegation also visited refugees camped out in a no-man’s land along the Bangladesh-Myanmar border and later stopped by the sprawling Kutupalong refugee camp.

In November 2017, Myanmar and Bangladesh struck a bilateral deal to repatriate hundreds of thousands of Rohingya. But the process has not yet begun and U.N. officials have expressed misgivings on whether conditions are safe enough for the refugees to return to Rakhine.

During the past two months, meanwhile, the Bangladeshi and Myanmar governments have separately signed memoranda of understanding with the United Nations for U.N. agencies to assist them in the voluntary repatriation of refugees.

it should have been apparent to all the do-gooders in the West, UN and BBC, that the root cause of todays Rohingyas, has and always will be that small segment of diehard Muslims that have eversince 1946 created an insurgency and demands of a separate entity - a demand from the very onset for amalgamation with the Muslim Brothers in the then East Pakistan.
One might say retribution always deals a heavy price.