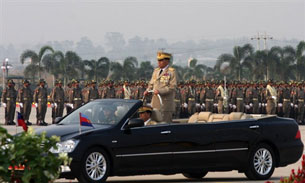 Former junta chief Than Shwe reviews an honor guard in Myanmar in a file photo.
AFP

BANGKOK—A prominent Burmese student leader has been sentenced to an additional five years of incarceration while currently serving time in prison, according to his attorney.

Kyaw Ko Ko, a member of the 2007 New Generation Student Leaders who participated in Burma’s September 2007 “Saffron Revolution” as a fifth-year economics student, was handed a five-year prison sentence May 21 by two Kyauk Tada courts in the former capital of Rangoon.

Kyaw Ko Ko was given the additional prison term based on “criminal acts” authorities discovered he had committed after he had already begun serving his initial sentence, according to Aung Thein.

“This kind of judicial procedure [occurring after a trial] negatively affects defendants because they are not given a maximum term of jail time to serve for their offenses,” Aung Thein said.

“It’s not just Kyaw Ko Ko who faces this kind of treatment—many other do as well,” he said.

“Now he will be forced to face eight years in jail.”

Kyaw Ko Ko was originally arrested by Burmese authorities on March 16, 2008 and sentenced to three years in prison in February 2009 for “video acts,” on the order of the Mingala Taung Nyunt township court in Rangoon.

Prosecution for “video acts” can sometimes refer to the possession of or distribution of video materials deemed politically sensitive by Burma’s ruling military junta.

Burmese officials remain wary of the country’s opposition more than two years after the monk-led democracy movement of 2007 was suppressed in a military crackdown by the junta.

Protests that began Sept. 18, 2007, were led by thousands of Buddhist monks, until security forces moved in Sept. 26.

The monks later said they hadn't expected soldiers to fire on them as they prayed unarmed during a campaign for change near Shwedagon Pagoda.

Public and civil organizations joined the movement the next day in a show of support for the country’s revered monastic community.

Burmese authorities systematically plotted to crush the movement, hiring thugs to stage military-style raids on monasteries on the night of Sept. 27.

The actions of the government forced the monks to scale back their protests out of fear that the public would suffer.

But Burma's Buddhist monks are still highly politically active despite the military crackdown.

Witnesses have cited increased security in Burma to discourage protests in connection with anniversaries of the Saffron Revolution, in which monks and lay people took to the streets in the biggest show of opposition to the junta since 1988.

The United Nations has estimated that at least 31 people, including a Japanese photojournalist, were killed when the army suppressed the protests. Hundreds were arrested, and many others fled Burma or went into hiding.

Burma’s military has ruled the country without interruption since 1962. The National League for Democracy (NLD), led by Nobel Laureate Aung San Suu Kyi, won a general election in 1990 but was barred from taking power.

The regime has confirmed that elections will take place in 2010, although no official date has been set. The polls will be the first since 1990.