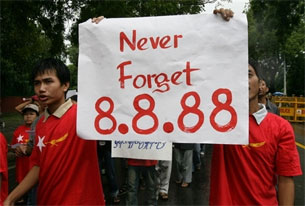 Burmese protestors shout anti-military slogans during a demonstration to mark the 20th anniversary of the 1988 pro-democracy revolution, in New Delhi on August 8, 2008.
AFP

Burmese authorities have detained  dozens of activists who marched in T-shirts commemorating the 20th anniversary of Burma’s 1988 pro-democracy movement, as key activists remained behind bars from last year’s “Saffron Revolution.”

Security around the country was tight. The junta fears a repeat of the 1988 demonstrations, which lasted six weeks and saw hundreds of thousands of people take to the streets. Government forces staged a bloody crackdown that September after six weeks of escalating protests, killing as many as 3,000 people.

Some 48 youths, including five women, were detained after they walked through the northwest town of Taunggok wearing T-shirts printed with the slogan “8-8-88,” alluding to the Aug. 8, 1988 uprising against the military regime. They were heading toward the Phaung Daw Oo pagoda to pray at around 7 a.m. when police blocked the street with wire and a fire engine, witnesses said.

Elsewhere, in several towns across Burma, small groups of dissidents prayed and offered food to monks to give merit to victims of the deadly 1988 crackdown, despite a heavy presence in public areas by security forces, Burmese sources said.

In Sittwe, some students wore black T-shirts to classes while others hung posters on classroom walls, witnesses said. Teachers asked them to leave and no one was detained.

In Rangoon, Mandalay, and Pegu, dissidents painted graffiti in red on walls and buildings urging people to remember the 1988 uprising. Sources in those cities said authorities instructed a number of shops not to sell red paint and to obtain the purchasers’ names and addresses if they were forced to do so.

The remembrances bring back painful memories for many Burmese, but memorials were generally quiet and private this year.

Much of the country is still reeling from the armed crackdown on last year’s monk-led “Saffron Revolution” and the widespread devastation caused by Tropical Cyclone Nargis, which killed at least 130,000 people in May.

The opposition party of Nobel laureate Aung San Suu Kyi said the 1988 uprising was a turning point in the country’s history, drawing thousands of ordinary people onto the streets around the country.

“People will never forget it,” National League for Democracy (NLD) spokeswoman Nyan Win was quoted as saying by Agence France-Presse.

‘The daughter of my father’

At the time, the 1988 uprising was characterized by opposition leader Aung San Suu Kyi, currently under house arrest at her Rangoon home, as the country’s second independence struggle. In the first, her father, Gen. Aung San, played a key role.

“People might want to ask why I’m participating in this uprising only now,” she told supporters in 1988.

“It’s because this uprising concerns the entire country. As the daughter of my father, I cannot shirk this responsibility. It is also true that this uprising is our second struggle for independence."

Student leader Min Ko Naing is still being held in Rangoon’s notorious Insein Prison for his part in last year’s protests, which began as an expression of popular discontent over rising fuel prices.

“What we have is the strength of unity. We rely on the entire people of the country,” Min Ko Naing told supporters during the 1988 uprising. “We trust and respect you. No struggle is successful if the students are the only ones in the struggle, without the participation of the people.”

His words echoed the long history in Burma of protest against the authorities.

“Many of our brothers died in the 1962 uprising, the U Thant uprising, and the 100th anniversary of Thakhin Kodaw Hmaing. We learned a lot from them. We are successful today only because of the strength of the people,” he said.

U Thant, a Burmese diplomat who served as third Secretary-General of the United Nations, was denied a government funeral when his body was flown in 1974 from New York to Rangoon, which was by then under Gen. Ne Win’s military rule.

Tens of thousands of people turned out to pay their respects, however, and a group of students snatched the coffin and buried it on the former grounds of the Rangoon University Students Union, which Ne Win razed in 1962.

Another 1988 student leader fled the country after the uprising and is now living in New York.

“The role of the people became secondary. Whatever it is, when the military government thinks, it only thinks in terms of conducting battles and military strategies. When they are at war, they fight so that the battlefield will be clear, to reduce the firing power.”

In a grim, prophetic warning to anyone else trying to stage mass popular protests against Burma’s military junta, outgoing Gen. Ne Win had this to say:

“I am going to retire from politics. However, we will have to continue to control the country until the organizations are able to manage the country with full responsibility, so that the country is not chaotic or destroyed,” he said before leaving office in 1988.

“When doing so, I want all the people of the country to know. In the future, if you gather as crowds and kick up a fuss, the military will shoot so as to hit the target. It doesn’t shoot into the air to scare people.”

“So in the future, if you want to cause trouble, just remember that if we have to use the military, you will suffer a great deal.”

Original reporting by RFA’s Burmese service. Director: Nancy Shwe. Translated by Than Than Win. Written for the Web in English by Luisetta Mudie. Edited by Sarah Jackson-Han.