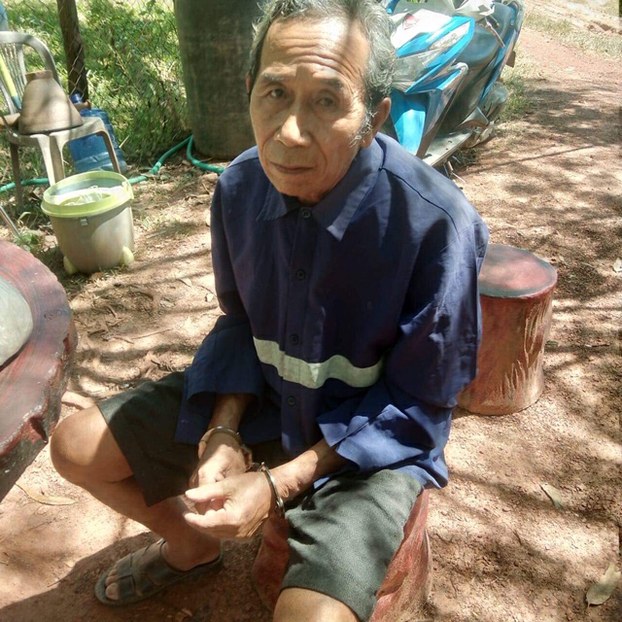 In this file photo taken in October 2019, an elderly Lao landowner, Thitphay Thammavong, is handcuffed in Bolikhamsai province's Pakkading district.

A high-ranking Human Rights Watch (HRW) official lashed out at the Lao government for continuing to hold a 69-year old man who was arrested two months ago, for refusing to vacate land that had been in his family for more than 50 years.

Thitphay Thammavong, 69, was arrested on September 16 after declining to sign papers that would cede control of his 1.5 hectare plot of land near Viengkham village in Bolikhamsai province’s Pakkading district, so authorities could build a health center on it.

“Wherever land grabbing takes place in Laos, villagers owning land who resist face being jailed, showing yet again how the Lao government abuses the human rights of villagers on lands the government requires,” said Robertson.

“Frankly the government never pays much attention to human rights,” he added.

Robertson pointed out that that individuals in the government are often behind land grabs, lining their own pockets in the process.

“Unfortunately, many Lao officials are involved in grabbing villagers’ lands for their own interests,” he said

“The land grabbing problem frequently happens because the Lao government does not take any responsibility to prosecute or hold accountable those involved in the illegal land grabbing. Villagers’ rights to their lands are abused regularly, it’s almost like government officials think they are like gods while treating the villagers like slaves,” said Robertson.

Thitphay Thammavong’s parents acquired the plot of land in 1965, and he inherited it in 1985. RFA reported in October that a village official confirmed both the acquisition and inheritance occurred long before Laos had a formal land titling system in place, but Thitphay obtained the title in 2012.

Thitphay remains in custody but his family has submitted a complaint to the national assembly in an attempt to resolve the case.

RFA tried to contact the Bolikhamsai police department, but failed, but in October, Pakkading district issued a statement that saying, “Thitphay was arrested for taking over state property reserved for building a Vietnamese-invested hospital that has been approved by the provincial governor.”

“The majority of villagers don’t have permanent land titles. This opens up gaps where the government officials can conspire with investors to rob [the villagers of] their lands,” the expert said.

He said that land “ownership” can be granted or taken away on a government official’s whim.

“Land laws recognize customary rights to land, meaning villagers without a permanent title can express their ownership of land use rights only with confirmation or witness of local authorities,” the expert added.

Villagers in Vientiane’s Saysettha district are embroiled in an ongoing land dispute involving the family of the late former mayor of Vientiane, Soukan Maharath.

A landowner published a Facebook Live video discussing the conflict.

She said, “I am doing this Facebook Live to let the government and the party know that the Namtha construction company signed an agreement on a land conflict solution with me but they are breaking the agreement by building fencing around land that is my property.”

The company was given a concession in Saysettha’s Xiengda village by the mayor 2012. According to villagers, Namtha was awarded the concession because the mayor’s daughter was married to the company owner’s son.

While the concession agreement states that the developer must compensate the villagers for their land, compensation offers were lower than they expected.

“Compensation does not match the value of the land,” another villager told RFA.

Laos often comes under criticism for land grabs in which authorities seize land from people for development projects without paying them fair compensation for lost crops, property, and livelihoods.

Rights groups say the illegal appropriations violate basic human rights and such land grabs are a major cause of social tensions in Laos and neighboring countries in Southeast Asia.

Look at the man's face. He's scared like hell but to the Lao blood-sucking party-state he's a criminal. Lao commies have no limit in their greed.

They are right about one thing, the Lao government is like God. Anything less is considered trash or slave.

This kleptocracy treats its citizens as slaves. The people have to fix their own roads and bridges because the dictators have stolen all their tax money and then they demand more.
What did the man do? Is it a crime to protect your home from thieves? I think the UN should place economic sanctions as punishment because ASEAN is useless.