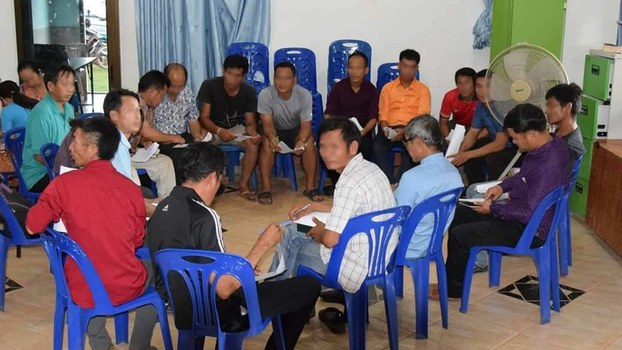 A group of Lao citizens discussing plans to stage a protest in the capital Vientiane before police came and detained some of them, Nov. 12, 2019.

Photo courtesy of a citizen journalist.

Authorities in Laos have released eight would-be protesters who were detained last week as they were planning protests calling for free speech and condemning land grabs and dam projects.

The arrests took place on Nov. 11 and 12, thwarting demonstrations the activists had planned for four locations in the Lao capital Vientiane during the That Luang festival, a Buddhist celebration of a 450-year-old, gold-covered temple.

Six of the eight were released Friday, with the remaining two were freed Saturday.

“They were all released by the 16th of November because they did nothing wrong,” said one of the leaders of the group’s organization over the phone to RFA’s Lao Service Monday.

“I talked to one of the people who got arrested. He said the police had nothing to charge them with, so they let them go,” the source said.

RFA contacted the Xaysettha district police department in Vientiane to inquire about the release Monday, but the officer who answered the phone said any inquiry would require a visit in person.

Later Monday morning, another protest leader explained that the police were looking for the “real mastermind” of the protest plan.

A Vientiane resident expressed his concern over the arrest to RFA, saying, “Based on international law, they did nothing wrong. But based on Lao law, those who protest against the State and the Party, are doing something very wrong.”

An unidentified government official told RFA, “If arrested, protesters can face serious consequences. They could be put in jail.”

“The better way to protest is to protest to the national assembly which is now open and will help solve their problems,” the official added.

There are no publicly available government figures on political prisoners in Laos, whose opaque judicial system makes it hard to give a reliable estimate on how many are being held.