Hmong Forced Back to Laos

Thai authorities force members of an ethnic group to return to Laos where some may face persecution.
2009-12-28
Tweet 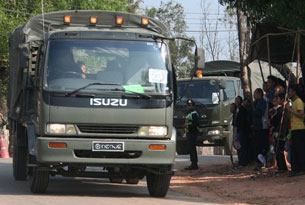 BANGKOK—Thai military armed with riot shields and batons have emptied a refugee camp in northern Thailand and have begun forcibly repatriating to Laos thousands of ethnic minority Hmong, despite protests from U.N. refugee officials, international rights groups, and the United States.

Col. Thana Charuvat, who is overseeing the deportation of the 4,371 Lao Hmong, who had sought asylum in Thailand, said in an interview that the initial busloads departed peacefully.

Neither journalists nor independent observers were permitted to witness the operation at Huay Nam Khao camp.

Some 300 Hmong, including leaders of the group, initially refused to leave the camp but agreed after several hours of negotiations, he said.

By late Monday, at least three busloads of Hmong had crossed the Mekong River into Laos and were sent to the Rassavong Hotel in Vientiane, the Lao capital, and then on to villages in Borikhamxay province officials said.

Each Hmong family of four was paid 10,000-15,000 baht (U.S. $350-400) to aid their resettlement, officials said. Thai officials said they expect to finish the repatriation within the day.

An anonymous call from a Hmong man in Bangkok claimed that about a dozen Hmong leaders who refused to go were beaten, blindfolded, and thrown into prison transport vans. His claim couldn’t be independently confirmed.

Another group of 158 Hmong asylum seekers in Nong Khai who have U.N.-certified refugee status were also repatriated to Laos but are supposed to have been given access to the UNHCR and allowed to settle in third countries within 30 days.

The UNHCR had described this group as "people of concern" who could be persecuted if they were sent back to Laos. 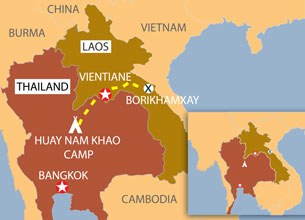 The route used to repatriate the Hmong to Laos. Credit: RFA RFA
The U.N. High Commissioner for Refugees said Monday it was dismayed by Thailand's move to deport thousands of ethnic Hmong asylum-seekers to communist Laos and urged Bangkok to halt the expulsions.

“I call upon the Thai Government to halt the forced return of the Lao Hmong, some of whom have international protection needs,” U.N. High Commissioner for Refugees Antonio Guterres in a statement.

The UNHCR said it had no access to the camp in Phetchabun province, abot 200 miles (320 kms) north of here, but understood from the Thai government that "a number of [the Hmong held there] have international protection needs."

“UNHCR has long maintained that the process should be transparent and that no one with a valid protection claim should be forcibly returned to Laos,” it said.

A Lao official in Borikhamxay said the repatriated Hmong will be resettled in several villages.

“We can assure 500 houses. Now 90 percent of the houses have been completed. The rest will be completed by the first month of 2010,” he said in an interview.

The new villages will have a school, health facility, and land for crop cultivation, he said.

Electricity and water haven’t yet been installed.

“For the first two years the Lao government will help the Hmong have rice and food to eat, and clothes to wear, because they are not able to produce yet,” he said.

Many Hmong say they will face persecution from the Lao government because of their Vietnam War-era ties with the United States.

Many Hmong fought under CIA advisers during a so-called “secret war” against communists in Laos. Thailand has insisted the Hmong aren’t genuine refugees but illegal migrants.

The U.N. High Commissioner for Refugees has repeatedly expressed concern about the fate of the asylum-seekers, noting they have been denied access to the agency to determine their reasons for fleeing.

The U.S. State Department said in a statement that Thailand’s decision to return the Hmong to Laos is a “serious violation” of international humanitarian principles and urged Thai authorities to suspend the operation.

“We also urge the Lao People’s Democratic Republic to treat humanely any Lao Hmong who are involuntarily returned, to provide access for international monitors, and facilitate resettlement opportunities for any eligible returnee,” the statement said.

Phil Robertson, deputy director for the Asia division at Human Rights Watch in New York, said that international monitors must be granted access to the Hmong returnees.

"There should be access granted by the Lao government to international monitors—to impartial monitors—to ascertain the protection needs and make sure that these people are treated humanely," he said.

"And ideally, of course, if they are found to have protection needs, to allow them to resettle to third countries."

My opinoin I think that Hmong Retrunees to laos will not be safe. Laos Communist regime never forget the Hmong role that played and served for the CIA. As You know that The foreign minister just Said that the Hmong leader General Vang Pao need to served life in jail before visiting Laos. Laos government never give Excuse for him. The Laos people Democratic Republic Civilian law still keeping and remembering the HMong people's role served in the CIA. The Hmong Village Chief in K/M 52 Mr.Koua Lee was reported to be missing by the Loas Local Authority last year.

To all Laotiane and lao -Hmong, the hmong people recently return to laos by the agreement between Thai- lao Authorities have snd to Kolikhamxay camp or detention Camp in LAOS. The lao LPDR authority are still need to investigate those Hmong people because some 158 are really hmong 30 years of Chao fa resistant fighter in the Jungle of Laos. They came from the Phoubia and the Phoulamphao Hmong resistant area the Lao Regime call the Hmong Chao Fa torristories. So today in Xiengkhouang province Laos soldiers have surrounded to kill them now. The hundreds of Hmong resisitant in the Phoubia today are prepare to move to Phonesavanh but the Lao Soldiers have set up a Soldiers Camp surround them in the Phaphai the former Hmong CIA SGU Soldier camp. They are very scare to move to the Lao Government. Mr. Bouasieng said everything I believe is not True. Laos will proscuted the 158 people from Nong Khai. Now the young men and elders men have been sapereted.

The US does not see the importance of these refugees. They are blinded by greed, money, and power. The US must have forgoten that the Hmong people played a big role in the Vietnam war. Who were the people who helped the CIA during those time? The hmong people did. The hmong people shed and sacrafice their blood for the US goverment and in return they get nothing. They just get sent back to where they fear the most, Laos. Everyone knows that al those refugee are going to get slaughter secretly by the laos goverenment. I give it a few months and there will be a headline of Hmong Refugee's slauter in loas... God Bless those Hmong refugee's and our prayers are with them. Hope they will make it through the tough times again.

i think this is so wrong that they wend so much hmong to LAOS... do anyone know how are they doing now or been taken care of. Is the Laos goverment helping them to get a home and food to feed the family. as my opion. I don't think any thing been done. I feel sorry for them... FREE THE HMONG... Cry out loud. send them to the US!

People please understand that our country and government are nothing but bloodshed, money is power. Why don't you understand it, it has been going for several thousand years or biggening of time. I bet everyon of been in Thailand camp before we moved to 3rd world country. I am so sorry for those people and hoping Buddha will protect them.