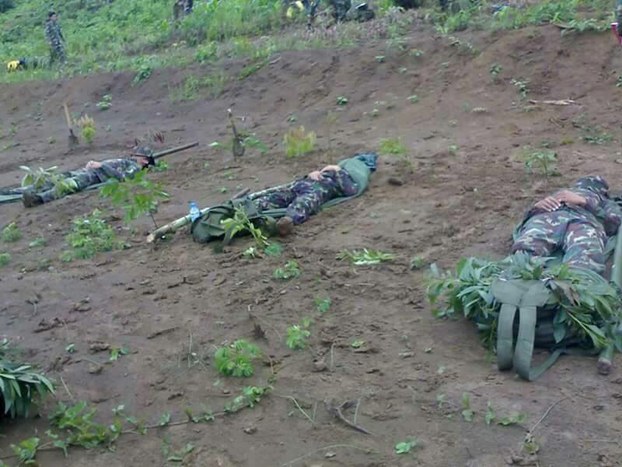 Bodies of three Lao soldiers shot dead in a clash with an anti-government group in Xaysomboun Province around Nov. 23-24.

Bandits in a mountainous and isolated province in northern central Laos have shot one person dead and injured three others in the latest of a series of attacks on vehicles passing through the region, said a retired Lao soldier close to a high-ranking officer in the Ministry of National Defense.

In the first incident on Dec. 15, 15 bandits shot two motorcyclists in Anouvong district of Xaysomboun province as they traveled along the road to Longchaeng district, 30 kilometers (98.4 feet) away, killing one and injuring another, he told RFA’s Lao Service, speaking on condition of anonymity.

In another incident three days later, bandits shot at a truck transporting beer on Nammo bridge in Anouvong district, injuring two people in the vehicle, one of whom is in serious condition and being treated at Military Hospital 103 in the capital Vientiane, he said.

“So far, some suspects who are believed to be bandits reportedly were arrested by military and police officers in Xaysomboun, but the officers have not disclosed the exact number,” the retired Lao soldier said.

Lao authorities imposed a 6 p.m. curfew in north-central Xaysomboun Province earlier this month after a spate of violence in which three government soldiers and three civilians were killed, according to police and other sources.

“Officials in the province are still maintaining the curfew,” the retired soldier said.

RFA contacted Lieutenant Colonel Bouanphanh, chief of Xaysomboun’s Police Department, and other officials involved in the matter, but no one would take the calls.

Bouanphanh, who previously had blamed bandits for one of at least six incidents of violence over the last month in the province, told RFA that authorities were investigating the attacks.

Armed robberies in Xaysomboun and other nearby provinces are routine along the country’s national Route 13 North, where bandits have shot at public buses that travel outside major towns not fully under the control of authorities in the underdeveloped nation.

Three soldiers were killed between Nov. 15 and Nov. 18 when they pursued an anti-government resistance group, which sustained unknown casualties, according to the retired soldier and another government source, who also spoke on condition of anonymity.

The incident occurred after the group was said to have killed the young daughter of a government military officer in a shootout at the officer’s home on Nov. 12, the retired soldier said.

Ten days after the incident, the group was involved in another shootout involving several trucks along a main road, leaving two people dead, he said.

There were also shootouts between government forces and the group during the Nov. 23-24 period, and on Nov. 25 and Dec. 2, he said, without giving any details of the incidents or casualties.

In response to the attacks, Lao’s national defense committee issued a circular, identified as Notice No. 283, on Nov. 19 warning other provinces to be wary of any further unrest staged by the group.

Shootings by bandits in remote parts of Laos, including Xaysomboun province, have occurred for decades.

An agriculture official, who was a victim of an armed robbery 11 years ago but was able to escape from his attackers, told RFA that bandits had opened fire on him and 10 colleagues as they traveled to work in Xaysomboun (province), killing seven of them in an hour-long attack.

“After our trucks departed Vientiane province along Route 13 North and entered the area of Xaysomboun around an hour later, bandits opened fired on us,” he said, speaking on condition of anonymity.

While the bandits shot at the men as they jumped from the truck, the agriculture official hid in the bushes on a cliff where he was out of view, he said.

“[But] I thought I would be killed there because the place where I was hiding was only five meters [16.4 feet] away from them — so close that I could hear what they said to each other.”

Xaysomboun was once a base for thousands of ethnic minority Hmong who fought under U.S. Central Intelligence Agency advisers during a so-called “secret war” backing the Lao Royal Army against the Pathet Lao communist forces.

After the communist takeover in 1975, a ragtag band of ethnic Hmong resisters hid in the jungle, fearing government persecution for having fought for the pro-American side during the war.

Might want to fix that before you start misleading people