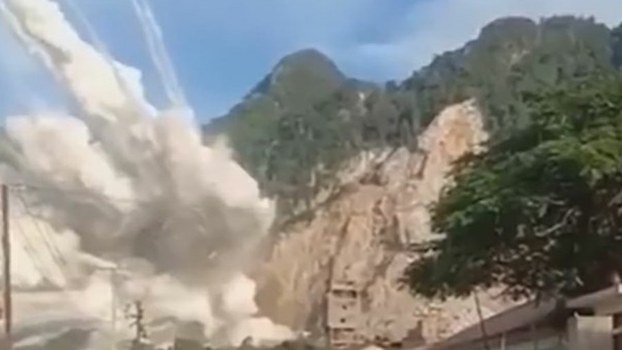 Scene of a blast at a Chinese cement plant in in Luang Prabang province in northern Laos that killed killing at least one person and injured more than 20 others, Oct 5, 2019.

An explosion Saturday caused by rock blasting for a Chinese cement plant in northern Laos tore through a village, killing at least one person and injuring more than 20 others, residents said.

The explosion was much more powerful than usual from rock blasting at the area and it appears that villagers were not warned in advance. The aftermath was caught on a video obtained by Radio Free Asia.

The video shows dust cascading from the blast site at a mountainside. There is debris strewn through a home, and people examining damaged cars and motorbikes.

A villager who witnessed the blast, about 500 meters (yards) from the village, told RFA on Sunday that: “The factory usually blasts the rock around 5 pm, but yesterday the explosion was more powerful because they used more explosive materials than usual.”

He added: “The Chinese factory never warns villagers of the blasts in advance.” The villager requested anonymity to avoid possible reprisals from authorities.

Villagers said at least one person was killed and more than 20 were injured.

A local Chinese-run clinic was inundated with injured people. Others were sent to the provincial capital of Luang Prabang for treatment.

Khammany Inthirath, minister of energy and mines, said Sunday that the government has sent a team to investigate what happened. “Now we do not have the answers. We might have more details in the evening,” the minister told RFA.

But around 6 pm, RFA called Khammany Inthirath for more information but he did not pick up the call.

The operator of the Chinese cement plant that has been running for some years near the village could not immediately be reached for comment.

The rapid proliferation of Chinese-owned industrial, hydropower, mining and tourism projects in Laos has caused friction with local residents over pollution, loss of farmland and economic compensation for displaced villagers.

Reported by RFA's Lao Service and translated by Ounkeo Souksavanh. Written in English by Matthew Pennington.

Lao government should be ashamed of themselves. The government just does not care about the health and well-being of the people. The government is so corrupted and the only thing they care about is money in their pockets. Regime change is needed for the sake of the Lao people. This is a do nothing government except begging money from foreign countries to put in their own pockets.

This is tragic and simply unacceptable. Have these callous Chinese or the Laos government no care for the lives of the people? Of course not. It's imperative that they carry out their practices with special regard to human life - stop being jerks for once.

Unscrupulous investors love to come to Laos because they can do whatever they want without impunity. Damage the environment, kill people, kill animal life. All they have to do is flash money in front of the dictators.

Don't worry, be happy ! There'll be more deaths to come. You're finished Laos.

Cement production is another contributor to GHG. and of course debilitating chest disease. I am so tired of the Chinese behaving like they own the place but I guess in reality they do. Laos has been bought and sold.