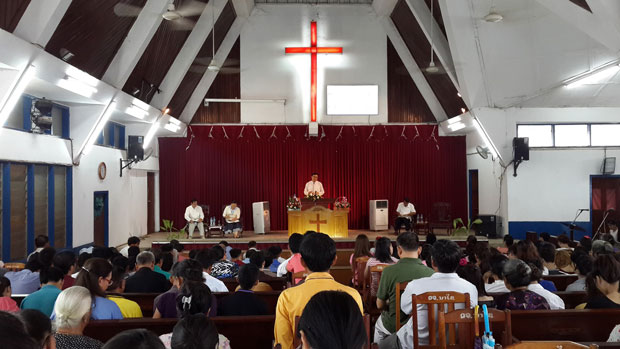 A Christian service is held in a church in the Lao capital Vientiane in a file photo.
RFA

Lao Christians observed religious holiday services this year largely free from government interference, though state officials were required to be present to check for anti-government messaging, sources in the country say.

Speaking on Dec. 24 to RFA’s Lao Service, an official at the Lao National Reconstruction Front, which oversees religious affairs in the one-party Southeast Asian country, said “We allow them to celebrate this event every year.”

“The only restriction is that when they are preaching, they are not allowed to say anything against the rules and laws of the country,” the official said, speaking on condition of anonymity.

In Xiengkhouang province, where he works, around 800 Christians conduct services in their churches or at their pastors’ homes, but must invite local officials to attend events in order to guarantee “order and security,” the official said.

Also speaking to RFA, a Lao Christian in the capital, Vientiane, said that Christians in the capital celebrated Christmas this year in local churches with state officials present to provide “security and protection.”

Meanwhile, four Lao Christians were arrested last month in the Keovilai village of Savannakhet province’s Vilabouly district and held in custody for a week for conducting religious services without permission from authorities, sources said.

“They were detained because they had held services according to our religion,” a Lao Christian leader told RFA in a recent interview. “But the [local] authorities don’t want to have Christians here in our village, so they stopped the service.”

Appeals to higher levels of authority in the central government prompted district and village officials eventually to free the detainees, but only after community members were questioned and one elderly woman named Bounlam fell ill and was sent to a hospital, he said.

“One week later, they were all released,” he said.

Reached for comment, an official in the Vilabouly security office declined to discuss the case, calling it an internal matter for the district.

Conflicts between Christians and local authorities often flare up because believers assert the right to freedom of worship guaranteed by the country’s constitution, while authorities call Christianity a foreign religion and say that Christians must move out of their villages, RFA’s source said.

In a 2017 report, the U.S. State Department said that Lao local authorities often arrested or detained members of minority religions during the year, with a district-level official in Houaphan province expelling 26 Hmong Christians from their village, advising them they could return only if they renounced their faith.

Dear Lao people of christian faith. Let me wish you all Merry Christmas and a very happy new year 2019. May God bless you and may the new year bring you good health, good fortune and happiness. But please never trust the Lao communist party-state even though sometimes they like to make friends with you because what they want is money from the free world for good behavior.