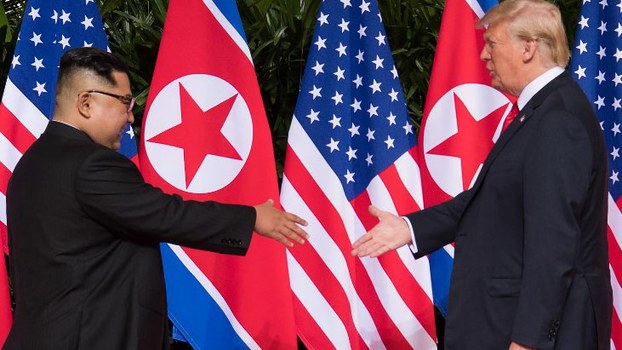 "I feel really great," said Trump, the first sitting president to meet with a North Korean leader. "It's gonna be a great discussion and I think tremendous success. I think it's gonna be really successful and I think we will have a terrific relationship, I have no doubt."

Speaking through a translator, Kim replied: "Well, it was not easy to get here. The past has ... placed many obstacles in our way but we overcame all of them and we are here today."

The one-on-one between Trump and Kim at the Capella hotel on Singapore's resort island of Sentosa was to be followed by a wider meeting that includes officials from the two countries.

Expectations of a major breakthrough on the vexed issue of North Korea’s nuclear weapons program were low, but the meeting itself marked a sharp contrast from recent months in which Trump and North Korea exchanged insults and war threats.

Trump officials expressed optimism ahead of the meeting, with Secretary of State Mike Pompeo, who made two recent trips to Pyongyang to meet Kim, saying that "North Korea has previously confirmed to us its willingness to denuclearize and we are eager to see if those words prove sincere."

Pompeo, however, said that U.S. economic sanctions would be tightened if North Korea refused to move toward complete, verifiable and irreversible denuclearization.

A major obstacle to reaching and implementing any nuclear deal is that the U.S. and North Korea have differing definitions of denuclearization on the Korean peninsula. North Korea wants the extended nuclear deterrence the United States offers South Korea included in any deal, while Washington sees the issue as the dismantling and removal of North Korea’s nuclear weapons and facilities.

For Kim, who came to power in 2011 and has spent much of the past few years ramping up North Korea’s nuclear and missile tests, the meeting in Singapore helps him dispel his image as an international pariah who had his uncle and half brother killed to take on an unlikely role as global statesman.

Aiding Kim in his rehabilitation is Trump’s apparent disinclination in Singapore to raise the question of human rights in North Korea, a totalitarian country with 120,000 people in gulag-style political prison camps.

North Korea is one of the most repressive nations in the world, severely curtailing basic liberties, prohibiting political opposition and a free media, and meting out harsh punishments, including torture, rape, forced labor, and executions, for those who commit minor offenses or try to defect.

A 2014 U.N. Commission of Inquiry found that the government engages in widespread rights abuses that also include enslavement, murder, forced abortions, and other forms of sexual violence.

Last week more than 300 nongovernmental groups in Asia, Africa, Europe, Latin America, and North America, wrote a letter to Kim, urging  him to end forced labor and the abuse of prisoners, take action on the human rights recommendations of the United Nations, and provide monitoring of international humanitarian aid to ensure it reaches those who need it.

Rights experts argue that failing to address the nature of North Korea’s regime would make any nuclear deal difficult to verify without transparency and good faith cooperation with the international community.

"You can't really have a verifiable nuclear deal with an authoritarian closed government," John Sifton, a researcher with Human Rights Watch, one of the signatories of the NGO letter to Kim, was quoted by NBC News as saying. "You have to have some transparency, otherwise you won't be able to verify."

Beyond the practical aspects of verification is a concern that the pomp and pageantry of the Singapore summit will normalize North Korea and its leader, or that any nuclear agreement will guarantee the safety of his regime.

“Tomorrow, the entire world will be treating Kim Jong Un as a global leader, on stage with the leader of the most powerful country in the world,” Michael McFaul, a former U.S. Ambassador to Russia, said in a tweet Monday.

“Human rights, assassinations abroad, etc. will unlikely be mentioned. That is a tremendous achievement for North Korean diplomacy.”

"You really can't have a nuclear arms agreement with a closed state..." I think was the quote. The U.S. (and others) had an agreement with Iran that didn't have open inspections. What's the difference?