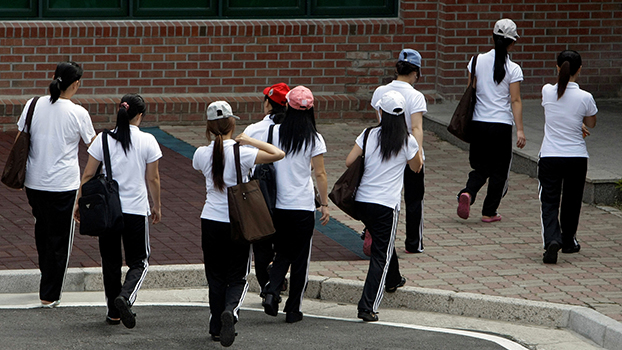 In a file photo, women who defected from North Korea to South Korea walk for their class at the Hanawon, a state-run official shelter for North Korean defectors.
AP Photo/ Lee Jin-man

The number of North Korean refugees arriving in South Korea has fallen dramatically since January, a result of China’s closing borders with its neighbors to combat the coronavirus, relief experts in Seoul said.

Only 48 North Koreans arrived for settlement in South Korea in the third quarter of 2020, a 79 percent decrease from the same period last year, data from South Korea’s Ministry of Unification show.

Though the July-September arrivals were four times the number arriving in the previous quarter, they amounted to the lowest third quarter total since 2003, when the ministry started counting numbers of refugees and defectors entering the South.

Groups who help North Koreans reach South Korea through China and other third countries say the flow of refugees will continue to be crimped by China’s border controls as well as those of Pyongyang.

In August, North Korea issued emergency orders to border guards to shoot anyone within a kilometer (0.6 miles) of the North Korea-China border regardless of their reason for being there, and it has introduced other tough steps to prevent citizens’ contact with foreigners during the pandemic.

The refugees who entered the South in the third quarter were likely those who escaped the North before the coronavirus hit the region last year, according to Ji Chul-ho, head of the Emergency Rescue team at Now Action & Unity for Human rights (NAUH), a South Korea-based North Korean human rights group that rescues refugees trying to make their way to the South.

But Ji told RFA that they would have also had to make it out of China to third countries amid tightening crackdowns before those countries closed their borders with China at the beginning of the pandemic.

“It is almost impossible to come from China to South Korea,” said Ji, who explained that NAUH’s activities are severely restricted by Beijing.

He said that with North Korea intensifying its anti-coronavirus quarantine efforts by thoroughly blocking the borders, to the point that even smalltime smuggling is not possible, it is difficult to confirm if refugee rescue efforts can be resumed through the existing routes from North Korea through China this year.

Ji predicted that the decreases would continue through the end of the year as China’s borders with North Korea and other countries would remain closed, with colder weather making escapes more difficult.

Jeong Kwang-il, the head of another North Korean human rights organization saying he expected that the virus, as well as the high cost of the journey amid security restrictions, would keep the totals trending downward.

“The cost of crossing the river [between North Korea and China] is so high that it is difficult to pay for it even if it is a rescue operation,” said Jeong.

Meanwhile, South Korean lawmaker Ji Seong-ho, founder of NAUH and himself a refugee from the North, wrote on social media Wednesday that South Korea should engage in “diplomatic efforts to protect and support North Korean refugees staying in foreign countries.”

The lawmaker cited Seoul’s North Korean Refugees Protection and Settlement Support Act, which says that the protection of North Korean refugees is a duty of the South Korean government.

Representative Ji at an audit of the National Assembly’s Foreign Affairs and Unification Committee on the same day asked South Korea’s Ambassador to China Jang Ha-sung to protect North Korean refugees and defectors detained in various parts of China who face the risk of forced repatriation.

“The number of North Korean refugees entering South Korea itself remains small,” a spokesperson from the ministry told RFA’s Korean Service in a telephone interview.

“It is not at a level where we can say unequivocally that the numbers increased [on quarter] due to special circumstances or changes in the situation, but we will have to wait and see,” the spokesperson said.

More than 33,000 North Korean refugees and defectors have arrived and settled in South Korea including 1,047 in 2019. According to provisional data from the Ministry of Unification, only 195 refugees have entered the South so far in 2020.